Despite, the pandemic hitting volume, the biggest deal in the region saw value in industrials and chemicals M&A rise significantly.

Industrial sectors including automotive, machinery and equipment experienced significant declines in output in 2020 as a result of lockdown measures and depressed demand. As a major exporting region, including into Germany's automotive market, the third largest in the world, this seriously hampered production in CEE.

However, industrials and chemicals (I&C) M&A was a surprise outlier in 2020. Deal volume rose by 1%, in stark contrast to the 22% fall in numbers across all sectors; while deal value increased almost sevenfold to €6.6bn – although OMV's €5.7bn acquisition of Austria's Borealis played a disproportionate role in this near-record showing. 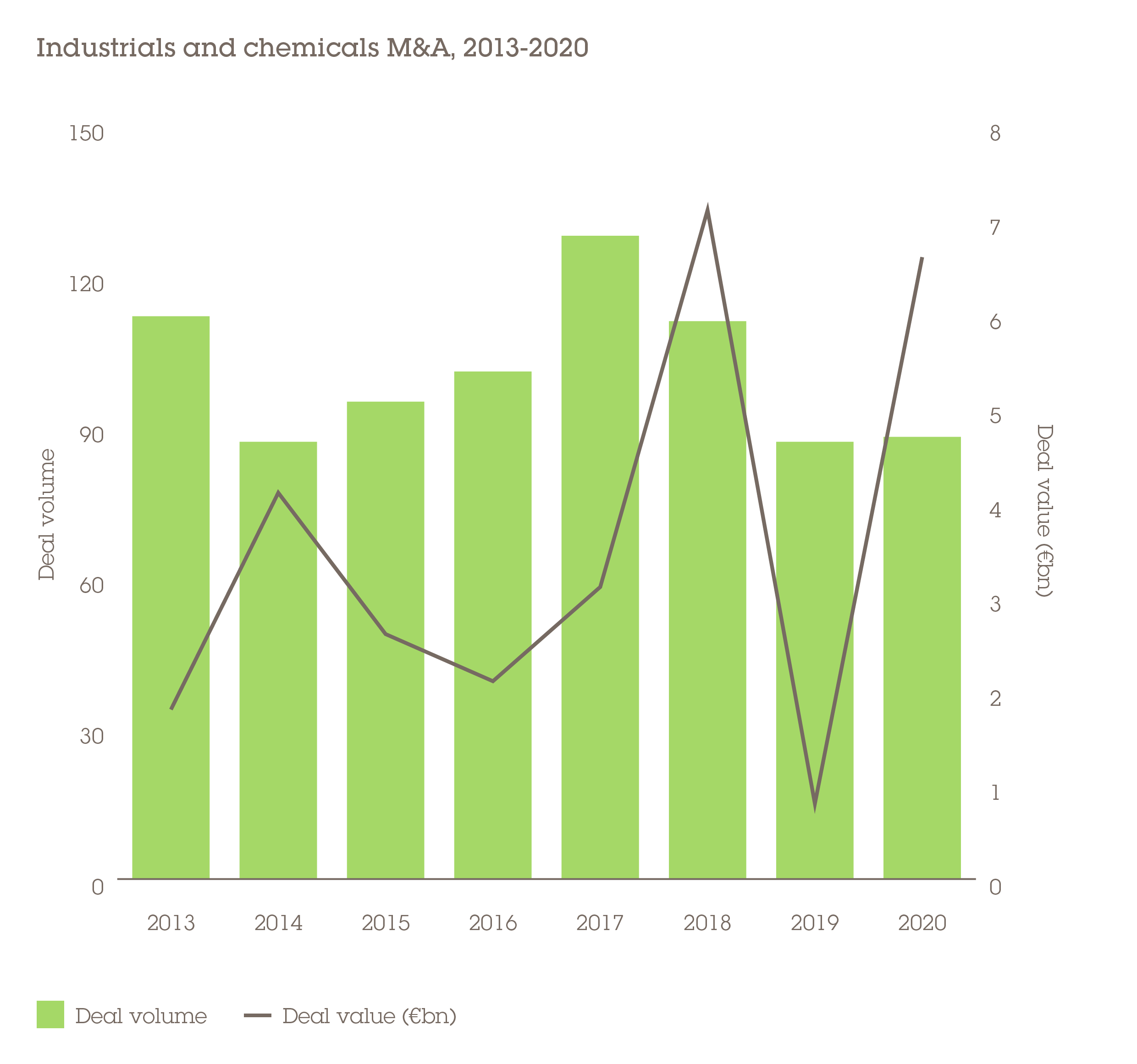 Although the sector lagged somewhat in 2020, it was not as adversely affected as bricks and mortar retail or travel and leisure services, and demand is expected to pick up in 2021.

Social distancing has been less of a concern for manufacturers and consumer demand remains, in spite of ongoing restrictions. The underlying demand for the downstream goods that upstream manufacturers and industrials companies supply should have a positive feed-through effect on M&A in the sector over the coming months. Well over half (58%) of respondents think COVID-19 will increase appetite for I&C deals. Of course, as is the case across sectors, the pace of the economic recovery hinges upon the efficacy of vaccine roll-outs in the context of newer, more infectious strains of the novel coronavirus that have emerged. 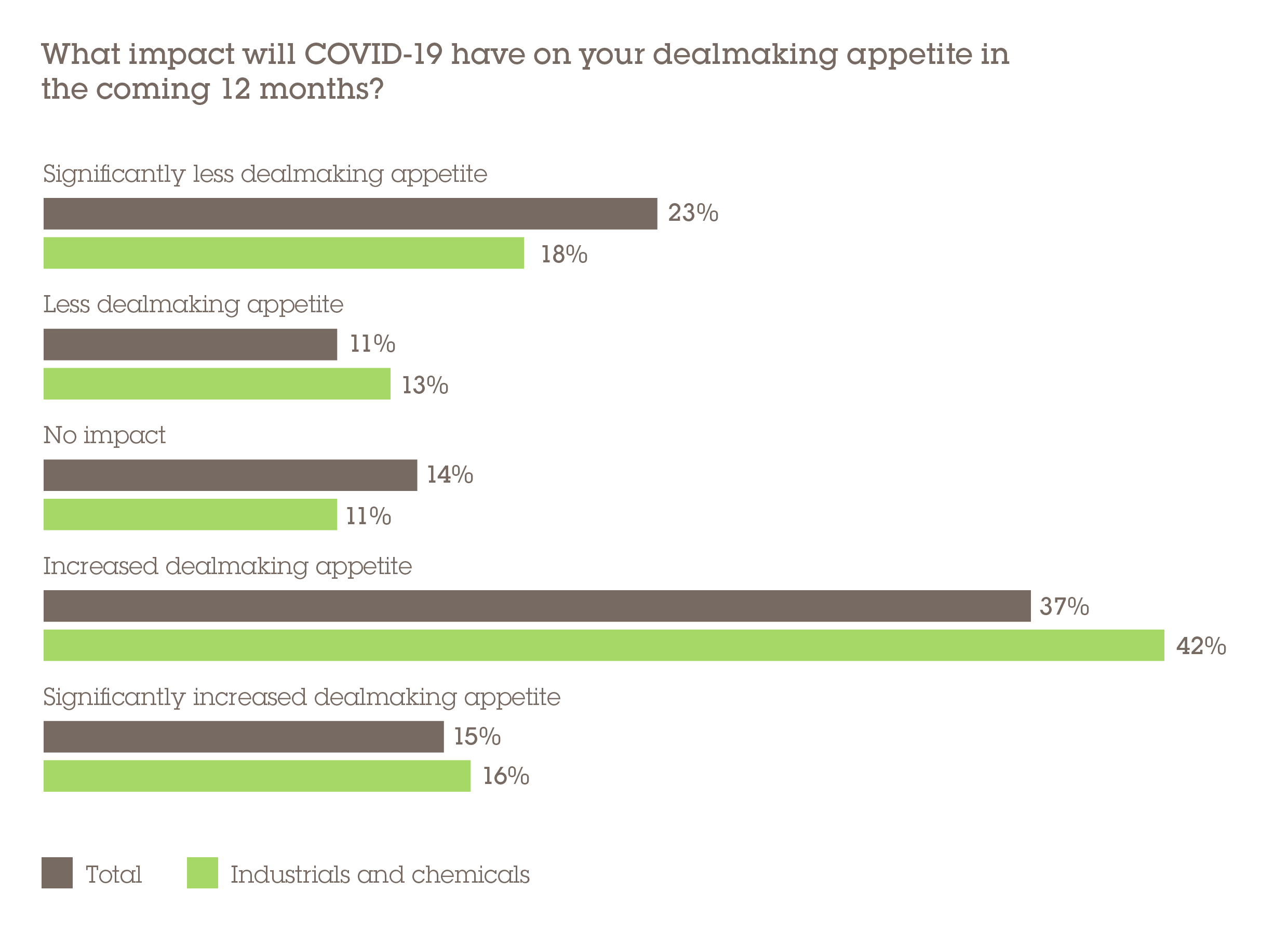 Our findings show that respondents view the Czech Republic (24%) and Poland (18%) as the top gateways for their next opportunity in the I&C sector. CEE has a well-developed automotive industry that serves major manufacturers in the west of the continent, with more than 100 of the 500 largest companies in the region operating in the sector. 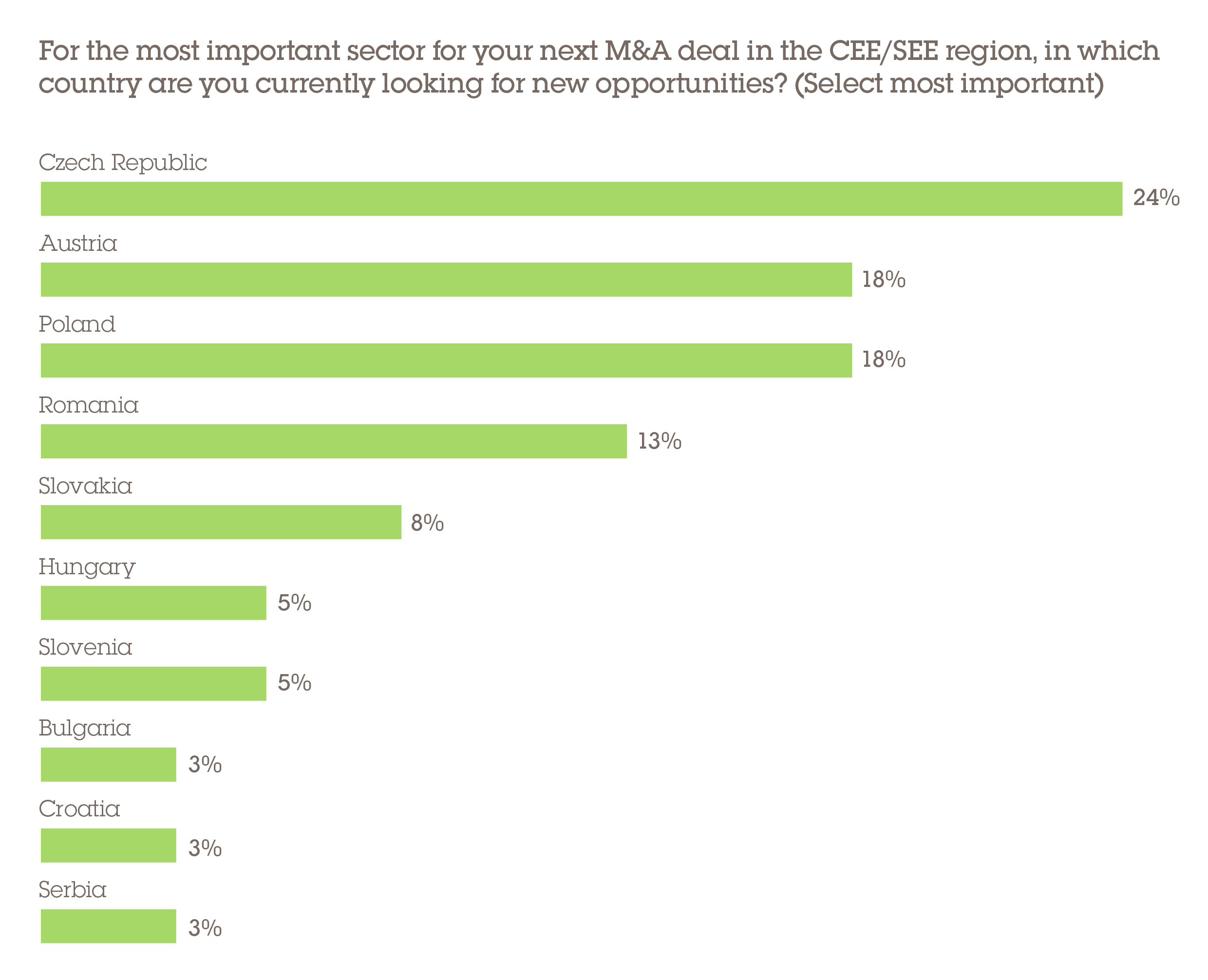 It is estimated that the industry contributes between 10-13% of GDP in Slovakia, Romania, the Czech Republic and Hungary. In 2019, 3.2% of global auto exports were attributable to Slovakia, followed in the region by the Czech Republic with 3.0%, the only two CEE countries among the world's top 15 car exporting countries. This core industrial export base is one of the most compelling characteristics of the region and this will remain the case for the foreseeable future.

As is the case across numerous sectors, financial distress is a key attraction – 21% of those surveyed said that the availability of distressed assets will have the most impact in choosing the country for their next I&C deal.

"We have recently witnessed a significant increase in distressed opportunities in Poland as well as in the CEE region generally. This includes transactions where groups have been deleveraging by selling both sub-performing and in some instances even profitable assets," says Lech Gilicinski, Partner in Wolf Theiss' Warsaw office. 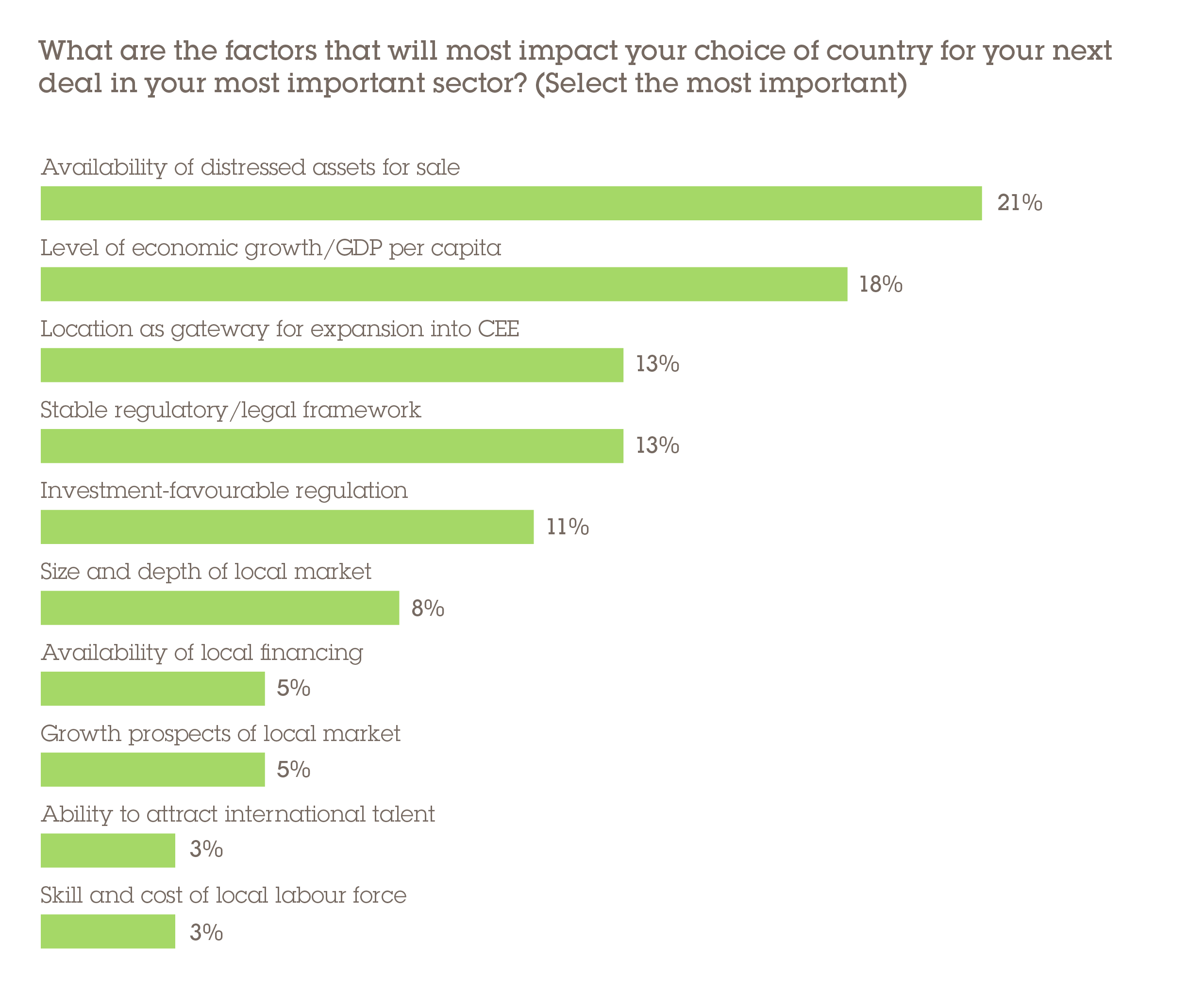 In terms of the reasons for selecting a specific asset, investors have their minds on manufacturing capacity and reach. Close to half (45%) said that a company's existing plant/real estate would be the main driver for their next deal followed by 29% who said the target’s regional distribution would be of most importance, the latter being a clear consideration given CEE's profile as a major exporter to Western Europe.

The high-quality, low-cost operations of CEE's industrial base naturally makes it attractive to European companies for outsourcing or establishing nearby production facilities. With rising costs in China and a western front on trade having formed against the Asian country, there is now a heightened focus on supply chain stability that is expected to motivate companies to relocate manufacturing closer to their operations. CEE's industrials sector is in position to be a major beneficiary of this trend. 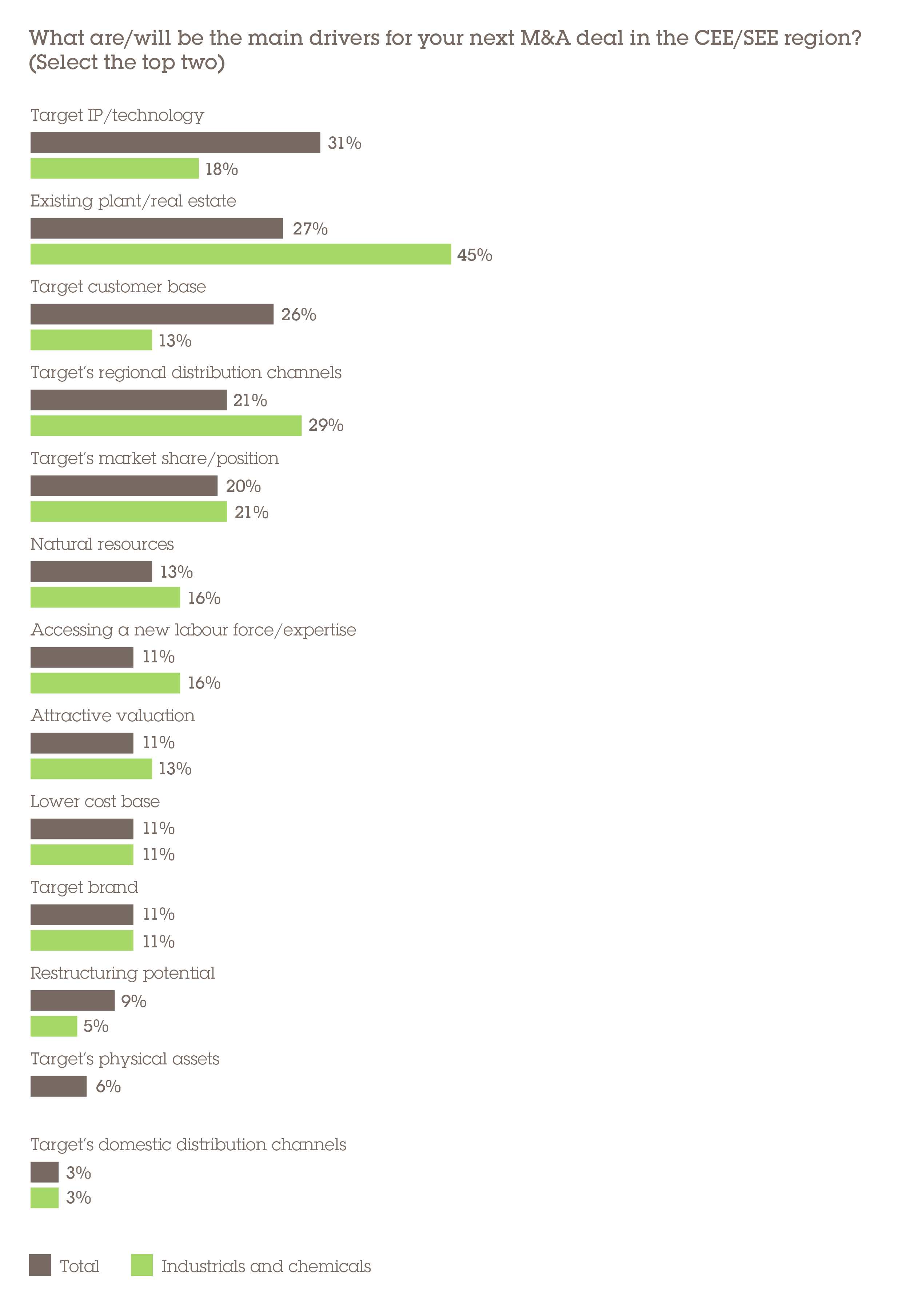 I&C on the rise

Industrials has been an ‘in-between’ sector in the past year, neither collapsing like leisure and hospitality nor booming like technology and e-commerce. Some companies positioned upstream in the manufacturing of essential goods have benefitted from sustained demand over the past 12 months, while car makers have suffered as consumers have refrained from big-ticket purchases.

Given this uneven performance there are likely to be pockets of distress upon which investors can capitalise. And given recent challenging trading conditions, the easing off of valuations is likely to make viable businesses look attractive for those investors confident in Europe's anticipated rebound and the recovery of export markets.