The global pandemic, ageing populations and the burgeoning biotech subsector mean that the pharmaceuticals, medical and biotech (PMB) sector is set to see robust M&A activity in 2021.

People need medicines even during times of recession, making the PMB sector highly defensive in nature. That can certainly be said of M&A value, which increased fourfold across CEE/SEE to €2bn in 2020, even as volume fell by 22% to 36 deals. 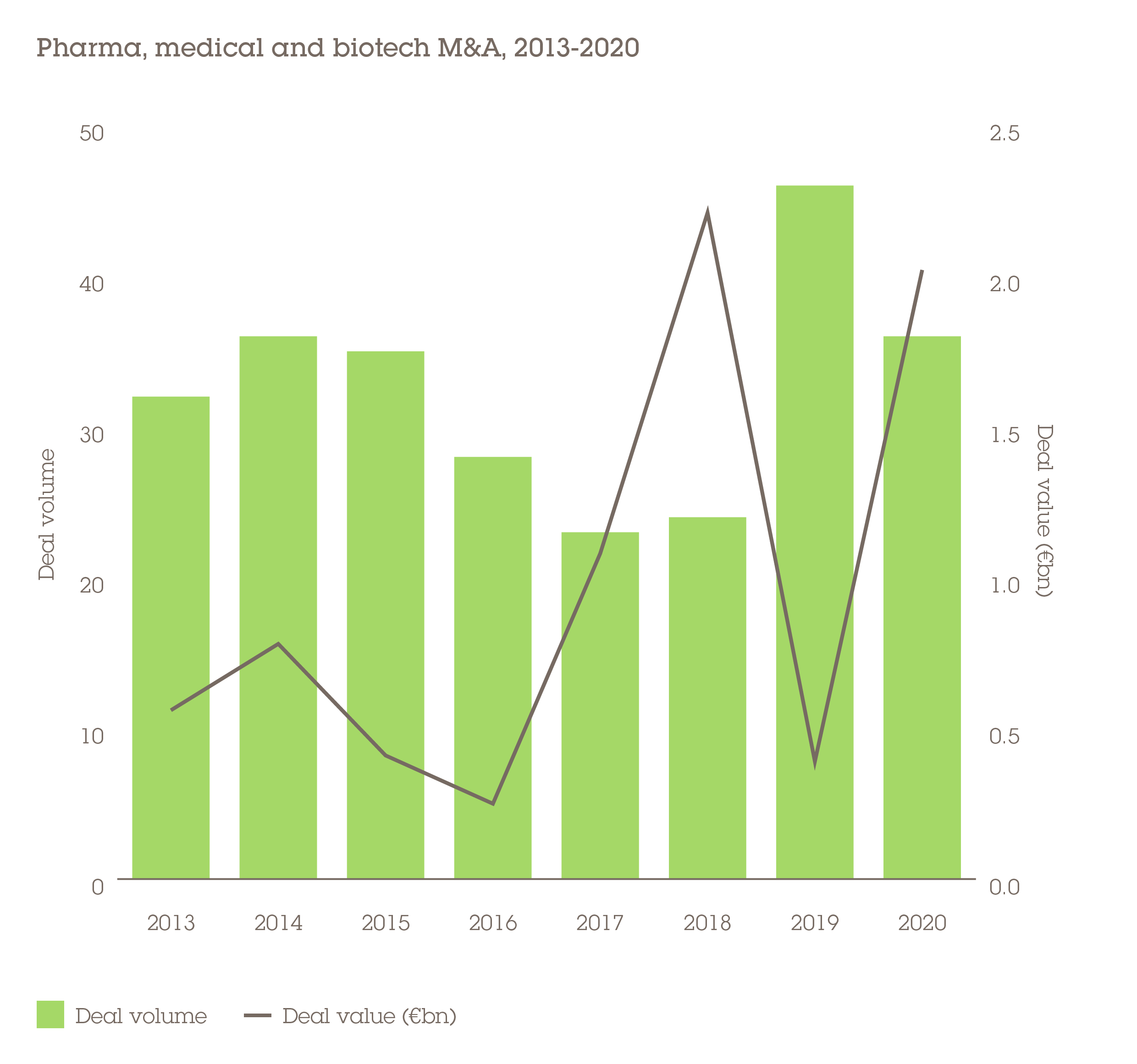 It was biotech in particular that claimed the lion's share of investment, including the three largest acquisitions. Topping these was Royal DSM's €980m purchase of Austrian animal nutrition and health business Erber which targets the agriculture market. "The transaction serves as a perfect example of the resilience of global M&A appetite in the healthcare & life sciences sector, despite a more volatile general deal environment," says Florian Kusznier, a partner in Wolf Theiss' Vienna office.

In second place was Sartorius's €360m acquisition of BIA Separations, a Slovenian maker of purification products for the analysis of large biomolecules, such as viruses, plasmids and mRNA.

Tech drives the future for PMB

Complications posed to deal processes aside, the pandemic scenario is conducive to M&A activity. More than two-thirds (68%) of respondents think COVID-19 will increase dealmaking appetite within the PMB sector, and that is already manifesting itself. Merck's €334m takeover of Themis Bioscience, the industry's third-largest deal of 2020, has a distinctly COVID-centric theme. Themis is developing a vaccine candidate that uses a variety of the measles virus to introduce inactive parts of the SARS-CoV-2 virus to help people develop antibodies. 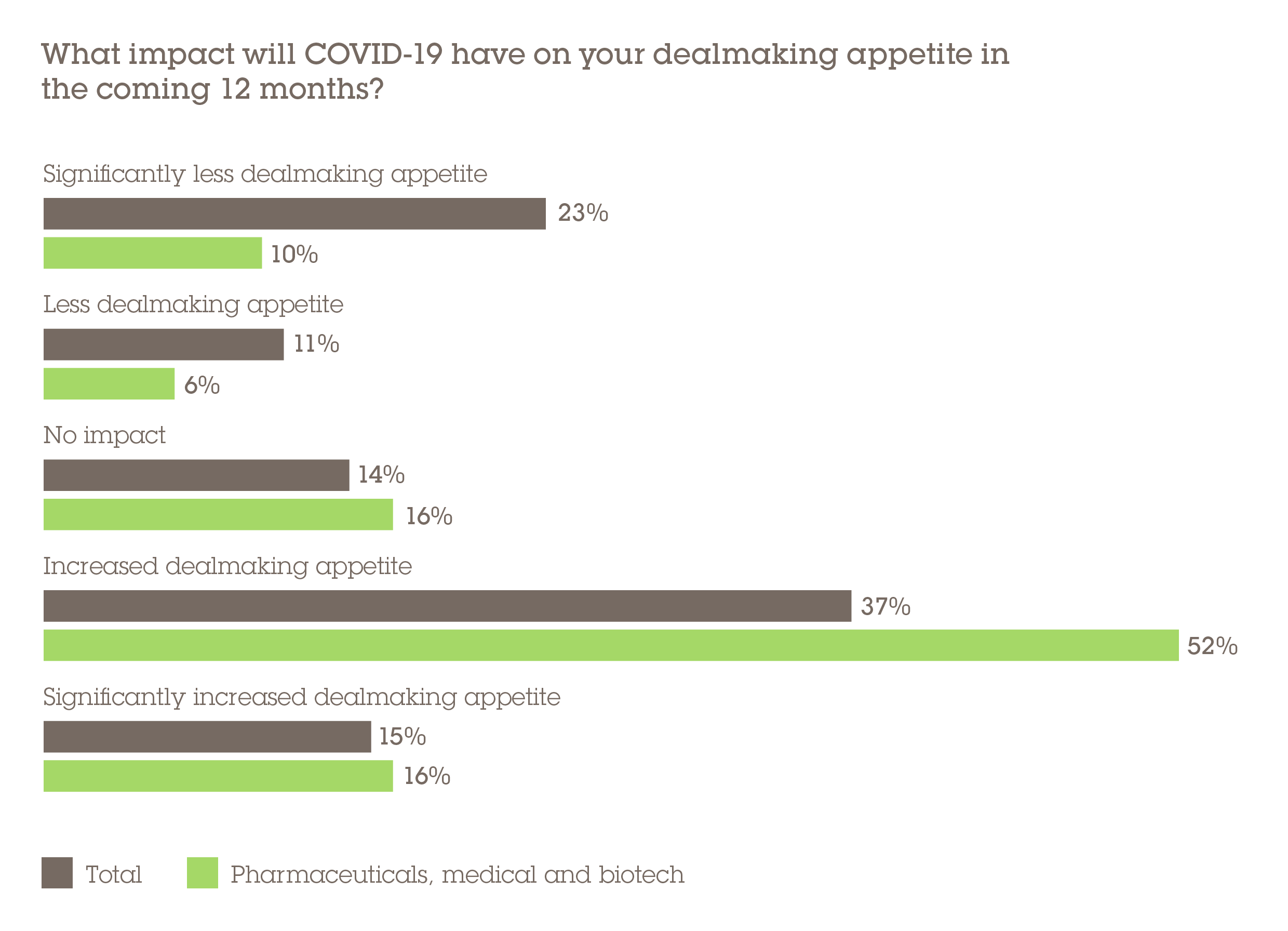 The most commonly cited drivers for investors' next PMB deal is the target's IP/technology (68%), followed some way behind by its existing market share (35%). Even where businesses do not possess exclusive IP, the pandemic is making its presence felt. For instance, US business Novavax, which itself is developing a coronavirus vaccine candidate, bought Czech business Praha Vaccines. It paid €152m not for the company's research and development (R&D), but to produce its development-stage product if it proves to be a successful treatment and gains regulatory approval. 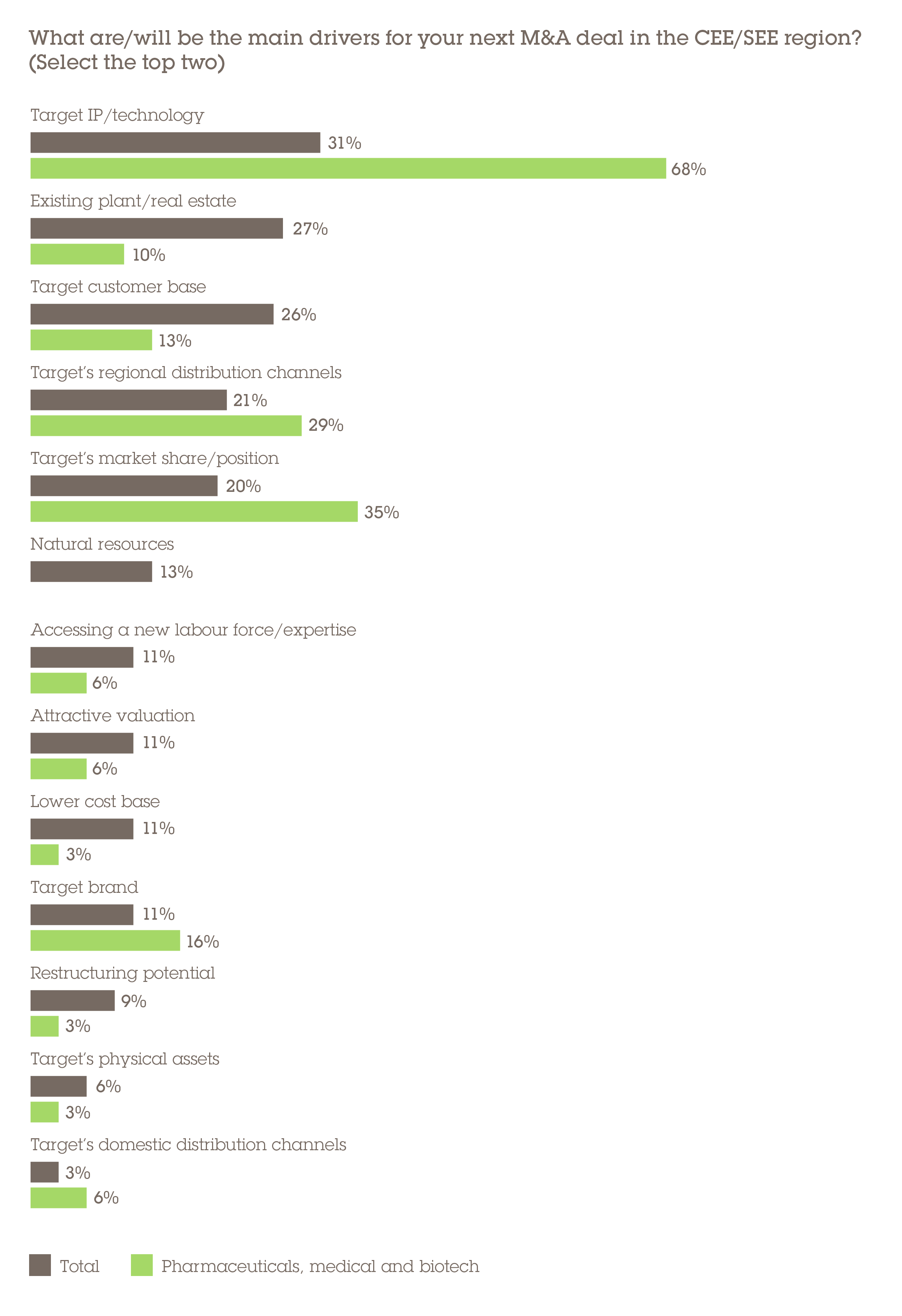 As a highly industrialised nation, the Czech Republic has a long tradition of manufacturing drugs. In 2004, Zentiva, which opened its first factory in 1930, was the first company to IPO on the Prague Stock Exchange since the bourse's post-communist reopening a decade prior. As a generics and over-the-counter medicines producer, the business is indicative of the country's wider pharma market, which largely makes low-cost unpatented drugs, often with manufacturing located abroad in countries such as India and China. The Czech Republic also has one of the best-performing healthcare systems in CEE/SEE, which helps to ensure demand for pharma products.

While much of the medicines consumed in the country are developed abroad, there are signs of foreign developers vertically integrating their existing distribution channels. One such example saw Swiss group IBSA buy the IBI Group, which had previously distributed its products in the Czech market for more than 24 years.

Poland, meanwhile, is the largest pharmaceutical market in CEE and the sixth largest in the EU, making it highly attractive from an investment perspective. This has been supported by significant prolonged economic growth and healthcare expenditure, and an increasingly health-conscious population. Poland is viewed as the most attractive destination for respondents' next PMB deal opportunity, cited by 29%, with the Czech Republic not far behind (26%). Meanwhile, according to 32% of respondents, it is GDP per capita that will have the greatest influence over their country of choice for their next PMB deal. 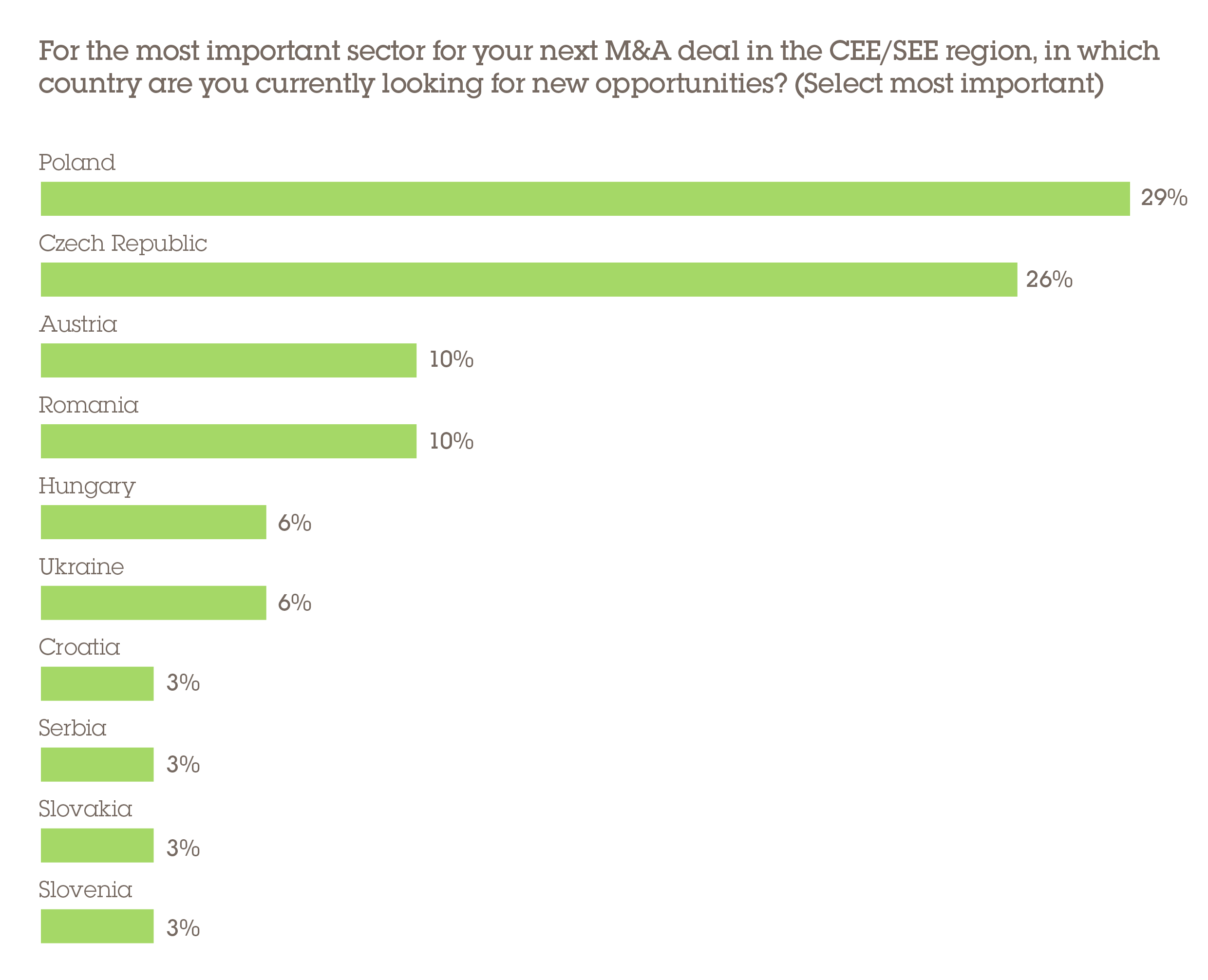 Meanwhile, when it comes to ESG scrutiny in PMB deals, 61% believe that this will increase in the next three years – with 29% believing it will see a significant rise. This score is lower than the overall total but significant, given that no respondents believe there will be a decrease in scrutiny. Social factors are likely to be at the heart of this new focus with patient safety, pricing issues and overall transparency being three of the key considerations for acquirers.

"ESG standards have increasingly become a dominant theme in M&A transactions, with investors seeking to ensure that their own ESG policy approaches are not compromised when pursuing acquisitions," says Sarah Wared a partner in Wolf Theiss' Vienna office. "This also means that Capex needs must be reassessed in light of required ESG compliance programs". 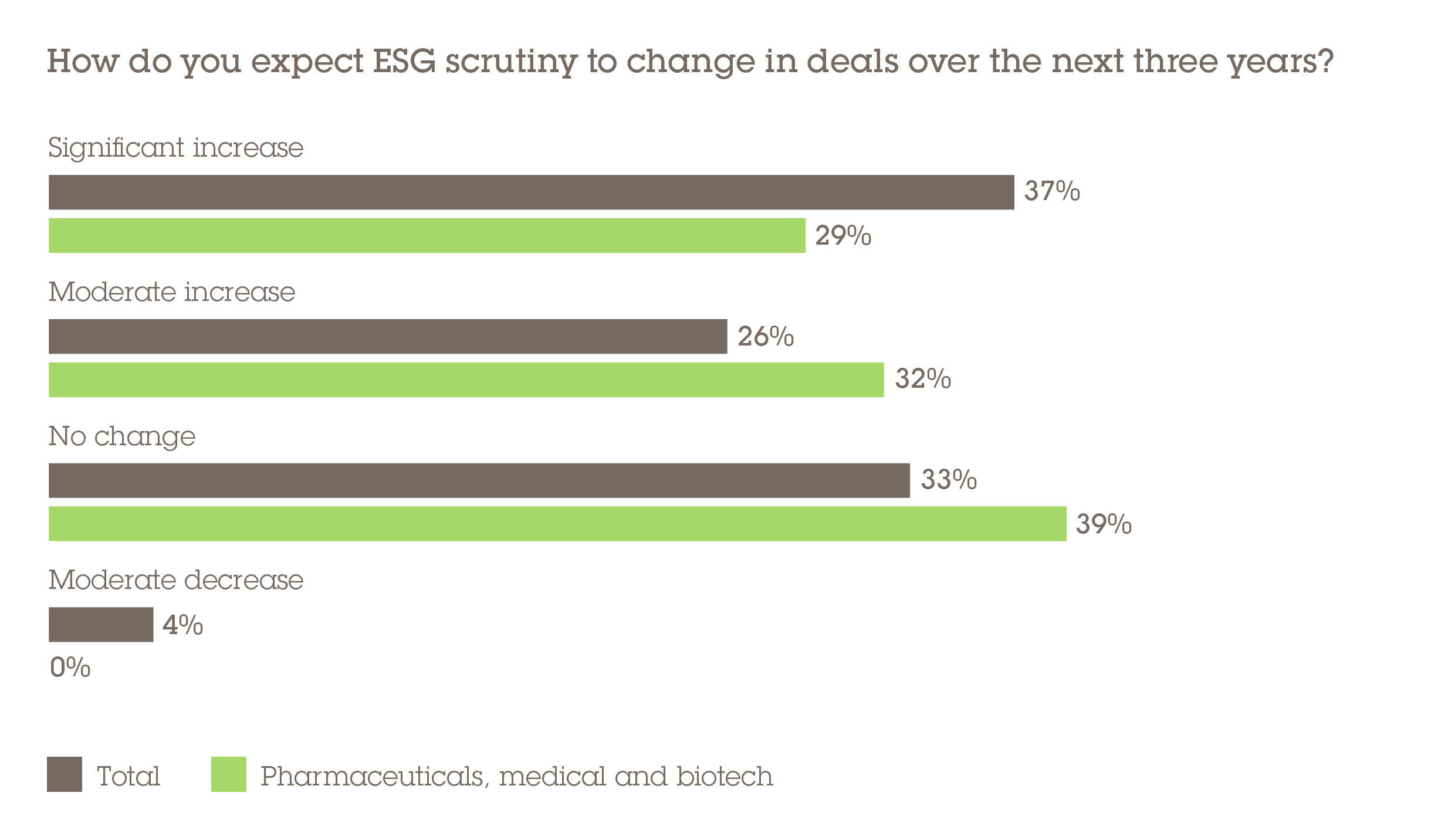 Both the short and long-term outlooks are highly positive for PMB M&A in the region. An ageing population will ensure demand for medicines, boosting production and distribution. Plateauing return on investment into R&D across the industry should also deliver deal flow as large groups seek biotech and gene therapy start-ups that are showing promising clinical trials. These can be easily plugged into product portfolios, saving on research expenditure.

While deal activity was disrupted in 2020, this was the result of heightened uncertainty and the difficulty in estimating the fair value of assets. Overall, the pandemic has only increased pressure on healthcare systems and the need for vaccines at scale will underpin manufacturing output, even if the vaccines themselves are not developed in CEE. With the gradual return of investor confidence and the stabilisation of earnings in 2021, M&A in the sector stands to benefit from a world making its way through – and, hopefully, out of a health crisis.