After the economic dislocation of the pandemic, an acceleration in shareholder activism is on the horizon, according to a new report published by Skadden in association with Activistmonitor and Mergermarket.

Investor activism is infiltrating throughout Europe, with 2021 having seen activist shareholders target a broad range of companies, particularly in the UK. The number of open live campaigns in Europe totalled 302 at year end, data from Activistmonitor reveals, representing a 16% increase from the end of 2020.

Armand Grumberg, head of Skadden’s European M&A practice, explains: “Though activism may have seemed less pronounced in 2021, this was only due to the decrease in public campaigns. Actually, the level of activism remained very high in 2021, and a large number of European companies are at risk of being targeted by activists in the future through either private demands or public campaigns.”

Survey respondents share this view – 97% of corporates now anticipate a rise in such activity in the year ahead, including 60% who expect the increase to be significant. This compares to 80% of corporates, in last year’s survey, who said they expected to see increased activism over the course of 2021.

“As the pandemic fog lifts, activists and bidders in hostile takeovers will be able to price forward and identify value for which the market is not crediting the target,” says Scott Hopkins, Co-Head of Skadden’s London M&A group. “Boards will complain that this is opportunistic, but they will be exposed until the market is convinced that the inchoate value will be achieved as an independent entity and that belief is reflected in the stock price,” Hopkins adds.

Another key factor is ESG. Nearly two-thirds of respondents overall (62%) believe activists will increasingly prioritise ESG issues in their campaigns. And at a more granular level, the data contains a warning sign for corporates and their boards. While 26% of corporate respondents strongly agree with this projection, amongst activists themselves, the figure is 80%. In other words, activists’ determination to capitalise on ESG issues in their campaigns is much higher than many boards consider.

Matthias Horbach, Head of Skadden’s German M&A practice, comments: “Even corporates with exceptional governance and social standing cannot expect to be spared­. Today’s ESG standards, whether in regulation or public opinion, are significantly broader than in the past. New legislation relating to supply chain responsibility, to give just one example, adds to uncertainty, and its effects are not limited to regulatory compliance.” 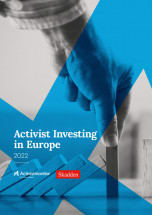