Fashion, retail and automotive sectors poised to be the most active

The Italian M&A market is expected to continue to struggle for the rest of the year due to the prolonged impact of coronavirus, according to dealmakers polled by this news service. Cheaper assets however are poised to attract financial sponsors looking to deploy their funds as early as the second half of the year, they added.

The fashion, retail and automotive sectors are likely to be among the most watched in the coming months, mostly due to their attractive valuations, said Alessandro Dubini, a Milan-based partner at Dentons.

Unlike during the 2008 financial crisis, funds can now invest vast amounts of liquidity, but sellers might be reluctant to put healthy companies on the market at low valuations, Dubini said. Companies in distress, on the other hand, might be more willing to consider takeover approaches, he explained.

International investors in particular are actively looking at Italian companies, echoed Mascia Cassella and Luca Masotti, partners at Masotti Cassella in Milan. Real estate assets will also be on their radar, including big hotels, Cassella and Masotti said.

Strategic and high-quality assets will still be of interest to investors, although valuations will be squeezed, said Bernardo Calculli, a partner at Astraco Advisory in Milan. Earnouts may also become more common, Calculli said.

The second half of the year could therefore see more transactions than 1H20, although dealmaking will still be dragged down by uncertainty, he said.

Restructuring opportunities in the Italian market are expected to pique the interest of turnaround PE funds, although likely not before next year, given the formalities that need to be adhered to in distressed situations, according to Dubini.

The pandemic has put domestic transactions on hold, and many companies are at risk of default, said Cassella and Masotti. Due diligence processes have been disrupted as a consequence of social distancing measures introduced with the coronavirus, they said.

Among the transactions that are on hold is the sale of health and allied services provider Medipass, as reported. Similarly, COVID-19 is likely among the factors to have impacted talks between coffee company Illycaffè and Peninsula Capital. This is due to Illy's increased focus on the bar business, a segment which was negatively hit by lockdown measures, as reported by this news service.

While the pandemic drastically impacted the automotive, retail and fashion sectors in March, April and May, companies in the logistics, food (including pet food) and pharmaceutical industries have fared quite well, Dubini said. 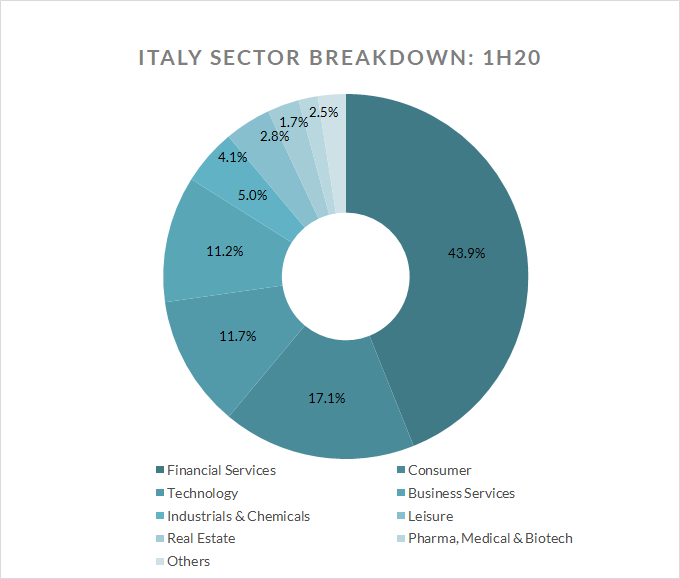 Private equity Green Arrow will relaunch in the autumn the auction of portfolio company Farmol, an Italian producer of personal care and household cleaning products. The process — which was put on hold due to the outbreak — was launched in February, as reported.

Similarly, Genetic, an Italian pharma business specialising in asthma medicines and ophthalmic treatments, is in exclusive takeout talks with CVC. The deal is expected to be signed in August.

Trilantic Capital Partners is also reining in on prized assets and secured exclusivity on the sale of Italian food supplements producer Dietopack.

In the food sector, Granarolo has pursued the disposal of non-core assets, launching the sale of balsamic vinegar producer Fattorie Giacobazzi, and has entered advanced negotiations with Grandi Salumifici Italiani (GSI) for the sale of its Salumi Gennari subsidiary.

Pasta maker La Molisana is also rumoured to be exploring a sale, having attracted interest from a string of financial players, as reported.

Italian M&A activity increased 23.8% to EUR 15.4bn across 182 deals in the first half of this year, mainly thanks to a solid, pre-COVID 19 first quarter, according to Mergermarket data. However, deal value in 2Q20 was only EUR 3.5bn across 68 deals, down from EUR 8.3bn across 168 deals in the same period the previous year. 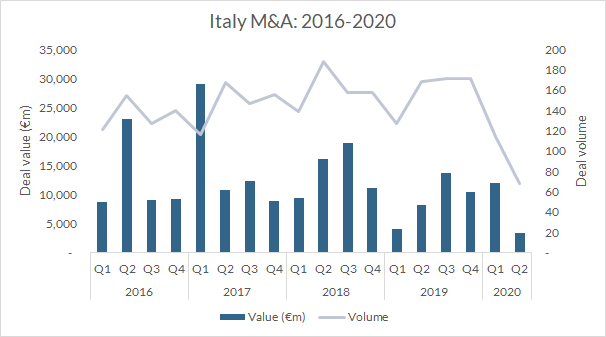 The most active sectors during the first part of the year were financial services, consumer and business services.

Among the top deals in 1H20 were Intesa Sanpaolo’s [BIT: ISP] planned public offer for UBI Banca [BIT: UBI], Marina Albera’s acquisition of a 30% stake in Esselunga, as well as Engineering’s buyout by Bain Capital and NB Renaissance.

In the energy sector, Morgan Stanley Infrastructure Partners has postponed the sale of Ital Gas Storage until the autumn, though it was initially scheduled to start in the first half of the year.

Meanwhile energy supplier Metaenergia has continued with its sale process and expects binding offers by end of July, as reported.

The sale of a 30% stake in the Italian solar energy group EF Solare Italia has also maintained pace despite market disruption; earlier this month it secured exclusivity with Credit Agricole Assurances-owned Predica, as reported.

As the first half of the year saw a decrease in private equity deals financial sponsors are now likely to focus on existing portfolios both in terms of financial and management resources, Calculli said.

In 1H20 there were 32 buyouts for a total of EUR 3.8bn compared with EUR 4.3bn across 56 deals in the same period last year, according to Mergermarket data.

IPO activity is also likely to be impacted by the pandemic, said Calculli. However, landmark transactions completed in high performing sectors showed that the market is recovering, said Paolo Garzarelli, head of ECM Italy at UniCredit. He pointed to GVS [BIT: GVS] which priced its IPO to reach a EUR 497m market cap mostly due to its exposure to the face-mask segment and the commitment from a cornerstone investor.

Players in the e-commerce/software and technology sectors are best placed to ride underlying trends and harness the current situation, making them rife IPO candidates, he said.

Activity in the second half of the year, however, is likely to be driven by recapitalizations to balance out capital structures and finance growth opportunities, Garzarelli said.

Issuers are seeking to tap into the equity market on the back of enhanced visibility on business performance and quarterly results. Secondary activity will continue to take place in a highly selective and price-sensitive environment, favouring solid equity stories in attractive sectors, he said.