Mergermarket is pleased to present the Baltic M&A Monitor, in association with Ellex. This report provides analysis of M&A activity in 2020 in Estonia, Latvia and Lithuania, along with forecasts for the year ahead.

The Baltics collectively recorded 70 M&A deals worth almost €1.2bn in 2020. These relatively small, open European economies were, of course, affected financially by the COVID-19 crisis. However, swift and decisive government action kept businesses going and underpinned investor confidence in the region. 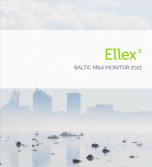