ESG in CEE: A cleaner, greener, kinder future for M&A in 2021 and beyond

ESG in CEE: A cleaner, greener, kinder future for M&A in 2021 and beyond

Environmental, social and governance (ESG) issues are no longer just a trend – they are fast becoming a mainstream part of the M&A process. And their importance is growing exponentially, according to our survey with Wolf Theiss.

Europe is leading the charge internationally in the push towards a greener future. Under the European Green Deal, which aims to make the bloc the first “climate neutral” continent in the world by 2050, existing laws will be reviewed, and new legislation passed in an effort to avert a climate crisis. As EU member states, CEE countries are beholden to this pledge and will have to adapt their respective legislative frameworks to accommodate for these ambitious goals.

ESG – covering socially responsible behaviour and strong corporate governance, not just environmental considerations – is becoming an increasingly prominent theme for institutional investors, who are holding the companies they back to higher standards than ever before.

Whether relying on ratings agencies in their capital markets investments or backing PE fund managers signed up to the UN Principles for Responsible Investment, ESG criteria are now embedded into investment decision-making.

Far from being derailed by the pandemic, as the world economy restructures itself around new consumption patterns, this inflection point is viewed as an opportunity to further drive the sustainability agenda. More and more, ESG will influence how both corporates and PE funds view and select deal targets and approach due diligence of risks such as emissions and energy efficiency, as well as money laundering, modern slavery and data security, in part to mitigate regulatory and legal risk.

“Over the next three years, regulators will be stricter about imposing fines for non-compliance of ESG factors,” says the CFO of an Austrian corporate. “Regions are reflecting on their current policies and working out effective changes.”

Recognition for ESG in dealmaking

More onerous regulatory obligations are only part of the story. Corporates and PE funds recognise that a strategic shift is necessary to create equity value as consumers and companies seek trusted partners with strong ESG values with which to conduct business. Firms that persistently fall short on ESG will ultimately lose business and revenues in the long term. Those that can adapt and improve their sustainability credentials while also improving their commercial proposition will be the winners of tomorrow. 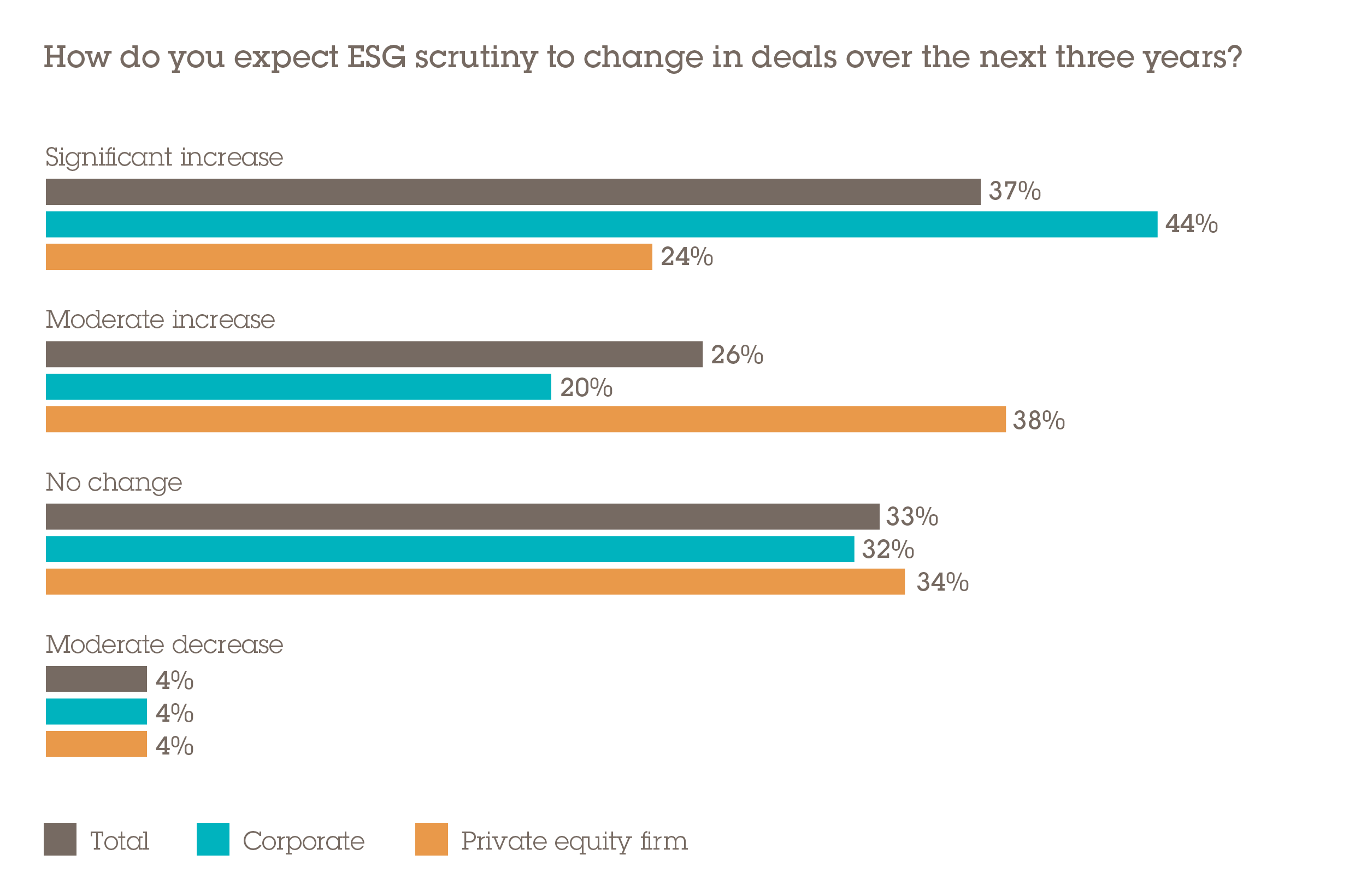 “ESG scrutiny will increase in the next three years and authorities are determining stricter rules to gauge the overall impact of a deal on the region and population – it is becoming an ever-greater point of regulatory focus,” says the M&A director of a Czech corporate.

ESG is a broad church, touching on all parts of a business, from its culture and values, governance, strategy, operations and reaching all the way through the supply chain. In fact, there is no aspect of business for which ESG does not apply in some way. Similarly, there are numerous dimensions to sustainable and virtuous business practices and behaviour. For respondents in our research, more than half (53%) said that business ethics is among the top three ESG issues that is most important to their firm or investor base. Climate change is close behind with 50% of the vote. 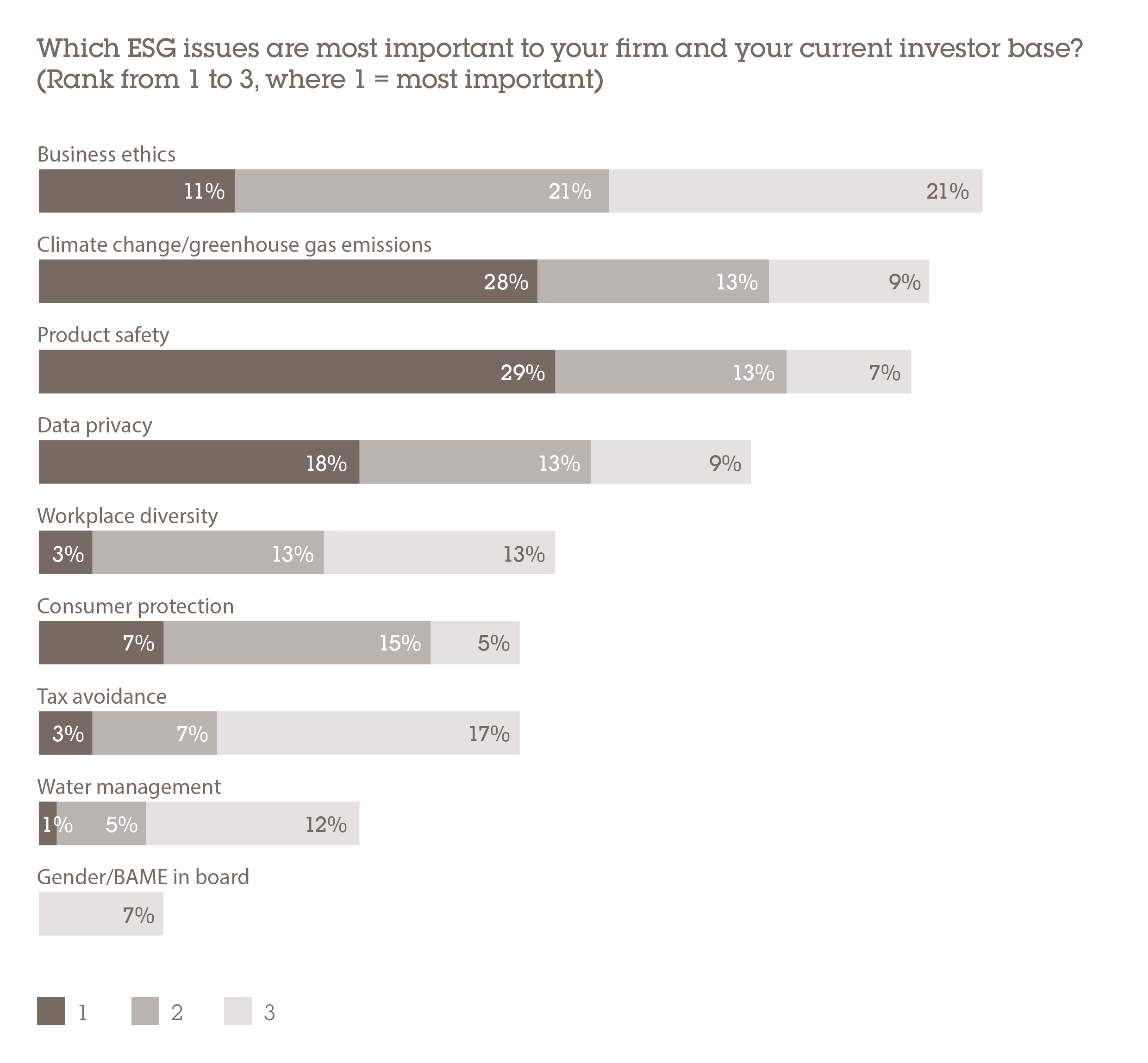 Improving the governance of companies, especially mid-market businesses that may not have paid due attention to these issues in the past, represents a real opportunity for private equity. “PE funds are introducing a lot of best practice by imposing corporate discipline and governance rules, cleaning up companies, so to speak, so that they are attractive investment propositions for corporates,” says Bryan Jardine, managing partner at Wolf Theiss's Bucharest practice. “We've seen corporates have the confidence to acquire businesses in which private equity was only a minority shareholder because the financial sponsors had done a lot of the heavy lifting to get the companies cleaned up by addressing previously troubling governance issues.”

The case for diversity

Diversity has been rising up the corporate agenda over the past decade, Europe once again grasping the nettle on the issue. In 2003, Norway became the first country in the world to pass a law requiring that publicly-listed companies have at least 40% of board seats held by women. Following its cue, the likes of France, Spain and Italy have since enacted similar diversity legislation. While CEE countries have been slower to react and there are no mandatory requirements to date, major progress has been made in recent years – and further progress may be on the horizon.

The EU Non-Financial Reporting Directive requires companies with more than 500 employees to disclose information in their management report on a range of issues, including board diversity, environmental risks, human rights, social issues, and anti-corruption and bribery – but this is non-binding and is aimed only at improving transparency to help investors make more informed decisions.

However, to accelerate stalled progress, the EU has indicated it may revive a diversity directive it proposed in 2012 but was ultimately forced to scrap after it faced opposition. Under the shelved directive, European-listed companies would face fines if they failed to ensure that at least 40% of their non-executive board seats were taken by women. Our research suggests that investors may be underestimating the significance of these proposals, even if they are likely only to apply to large publicly traded companies. Only 7% of respondents said that they considered gender and BAME representation on their boards to be an important ESG issue – and even this small minority viewed it as the third most important of all ESG considerations.

Some aspects of ESG such as diversity, social responsibility and strong corporate governance are of broadly equal significance for companies regardless of their industry. But some sectors such as carbon-based energy production and heavy industry are inherently problematic from a sustainability perspective. These businesses are having to address this as a matter of urgency.

Almost three-quarters (74%) of respondents believe that the energy, mining and utilities sector is already being affected by the implementation of ESG, putting it ahead of any other industry. Pharmaceuticals, medical and biotech (61%) and industrials and chemicals (45%) are also viewed as sectors now being impacted by ESG factors. 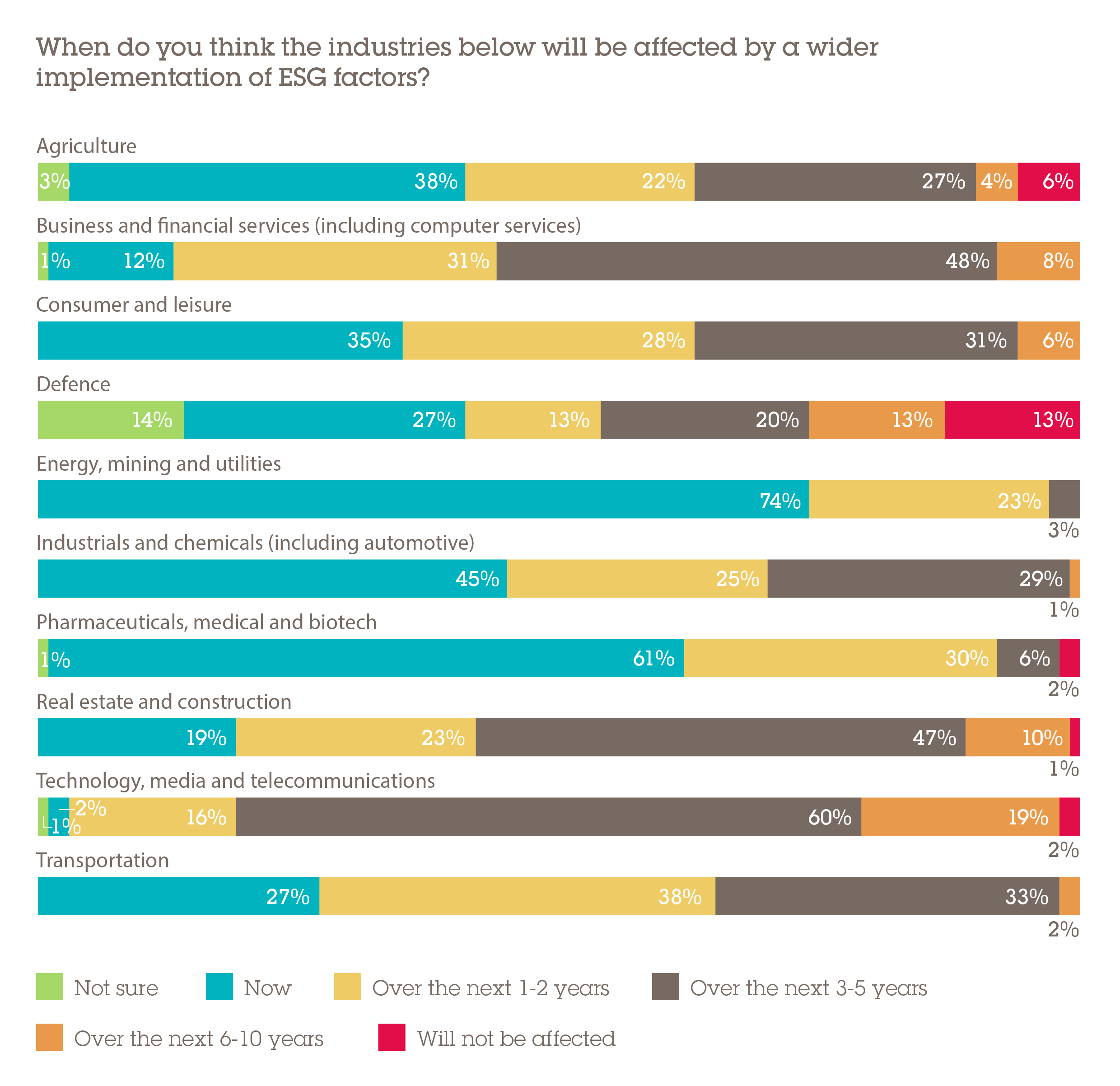 This represents a major challenge, but it is also a strong motivator for M&A activity. The €5.7bn acquisition of Borealis, the largest CEE deal of 2020, further repositioned OMV into the adjacent petrochemicals and recyclable plastics industry, diversifying it away from emissions-heavy oil and gas production. Fossil fuel producers in particular are having to think carefully about their futures in a world in which renewables are taking an increasing share of the energy mix. For what are often large, highly mature companies, M&A represents a shortcut for rapidly changing course and achieving a corporate strategy that is better aligned with Europe's ESG goals.