Number of acquisitions by sponsors falls 28% with value down 12%

COVID-19 has divided opinion in the European private equity community between those expecting the buyout market to rebound soon, and those preparing for the current market lull to last the whole year.

The bulls point to the weight of dry powder waiting to be deployed, positive signs coming from the capital markets and the deals that continue to be signed. The bears, however, need look no further than the damage the pandemic has already caused to M&A markets.

The effects of the virus are plain to see in the 31% drop in activity between the first and second quarters as first Italy then most of the continent imposed lockdowns. That is the lowest quarterly figure since 1Q13, according to Mergermarket data.

“This situation will last for the next year,” predicted Markus Golser, managing partner at midmarket sponsor Graphite Capital. “Until people can build up evidence of an LTM trading pattern that buyers can subscribe to and bankers can finance, it will be a sparsely populated market.”

However, private equity firms have continued to sign cheques in the run-up to and during the pandemic, most notably Cinven and Advent's EUR 17bn buyout of ThyssenKrupp's [ETR:TKA] elevator unit; EQT Partners and OMERS' EUR 2.8bn deal for fibre optic group Deutsche Glasfaser; and France’s Galileo Global Education, which was acquired by Canada Pension Plan Investment Board and Montagu, among other investors, in a deal that valued it at EUR 2.2bn.

In fact, buyouts accounted for a record share of the European M&A pie. Sponsors were responsible for 28.6% of the EUR 268.9bn recorded in transactions in the first half – a significant increase from the 20.5% half yearly average of the past four years.

Companies that are truly untouched by the virus remain “priceable”, but these are few and far between and have at most one-quarter of post-COVID-19 trading on which to prove their resilience. 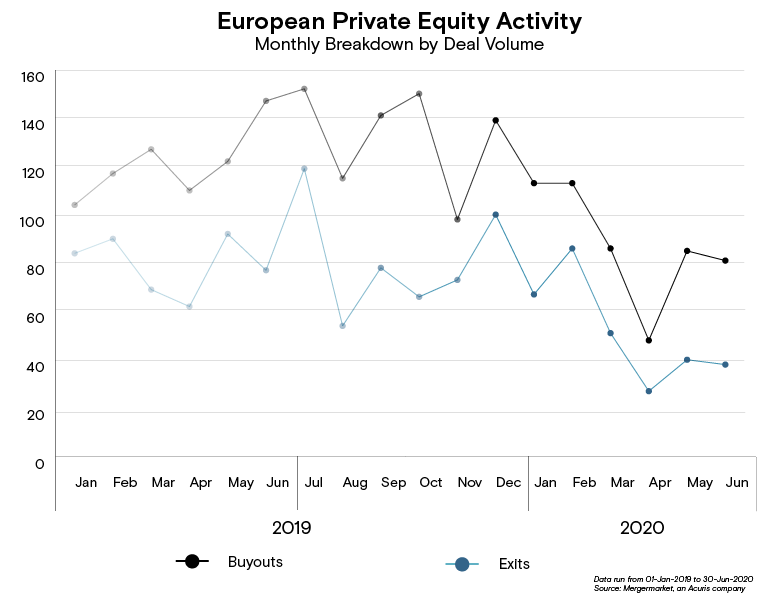 “The key to rising M&A volumes is confidence and stability - volatility is deeply unhelpful,” according to Simon Lyons, strategic advisory partner at PJT Partners. “Whilst the immediate volatility of the crisis has receded a little, it’s certainly not at the level where you would expect to see a significant return to major M&A across the board.”

As discussed previously in a Mergermarket report, dealmakers are increasingly fretting over the methodology to price assets.

The first half of the year saw private equity firms and their advisors spending unprecedented amounts of time on the portfolio, shoring-up struggling assets, helping them access government support, negotiate with lenders and reform their business models.

According to Jean-Baptiste Wautier, partner at BC Partners, for the first two or three months of the crisis the firm spent 90% of its time on its portfolio. “It was a crisis like nobody had ever seen, so there was no playbook and you had to react extremely quickly,” Wautier said.

Sponsors are turning their attention back towards deployment, but they can’t afford to forget about the portfolio. GPs have probably put out fires in 80% of their assets, estimated Christian Hess, Investec private equity client group head. But that still leaves the question: how much resource will the remaining 20% need?

The current demands of the portfolio are unprecedented, and that could lead to sponsors refocusing their attention on favoured assets, according to Simona Maellare, global co-head of alternative capital group at UBS. “There are some companies where the business plan might not be performing so well, and the sponsor has to put a lot of effort into managing the asset. In those cases, it could make sense to focus on some assets and others they will sell. I see a lot of that coming.”

Consumer-facing businesses were the first victims of the pandemic, hit by a sharp decrease in footfall. Sponsor-backed assets like Byron, owned by Three Hills Capital Partners, and KKR’s Casual Dining Group, are part of a string of restaurant chains that filed for administration.

That has also impacted dealmaking in the space. Mergermarket data shows that buyouts in the leisure sector, which include travel businesses to restaurants, were among the worst hit, down 67.6% in volume and 33.4% in value in a 1H20-1H19 comparison.

Still, some significant deal involving consumer and leisure businesses were signed. KKR has been among the most active in the space, with the acquisition of Dutch holiday park operator Roompot, estimated at EUR 1bn, as well as investing in a USD 750m convertible preferred equity investment in beauty brand Coty. Distressed buyers are also looking at this period to strike deals on the cheap, as reported.

At the fund level, the economic impact of the virus has created trade-offs between struggling assets and those that now see an opportunity for buy and build. GPs may not have the reserves to support both. LPs must continue to fund capital calls but no exits means no disbursements. However, what has changed sine the 2008 global financial crisis is the number and variety of options available to GPs and LPs that are struggling for liquidity.

“Many GPs nowadays have portfolio teams that can quickly understand what is going on and access financing,” according to Richard Hope, head of EMEA at Hamilton Lane. “If you go back twelve years, there were almost no portfolio teams to speak of and very little liquidity in the market”.

Preferred equity and NAV financing, for example, are booming. Hess of Investec said that fund financing is keeping him busy despite the fall in M&A. A number of GPs are balancing the needs of struggling portfolio companies that need further equity, with others that see an opportunity for buy and build. The ten percent of capital typically left in a private equity fund may not be enough to address both these competing demands.

17Capital, which offers portfolio financing to GPs and LPs, has doubled its deal flow and tripled its level of capital deployment this half compared to the whole of last year, according to managing partner Pierre-Antoine de Selancy. He puts that down to the crisis and expects to be even busier in 2H20, if the M&A market stays shut. While in normal times, 17Capital’s funding is typically used to fuel growth, most of the deals it has signed in recent months are “defensive” and are designed to shore up portfolio companies, he said. “This is a tool that is increasingly accepted by LPs as helpful for preserving value. Sometimes we even see them participate themselves in the deal,” he said.

Reasons to be cheerful

Despite these challenges, some dealmakers are beginning to see a glimpse of light at the end of the tunnel.

After a lull in activity over the past months, Anu Balasubramanian, partner and head of private equity at Paul Hastings, noted a near doubling to tripling of activity just in the last two to three weeks. “That is probably a sign of almost all of Europe now being open for business, with the UK government the latest to open up,” she said.

If the previous six months serve as any guidance, private equity appetite remained strong for assets in the technology sector, which saw the value of disclosed deals double to EUR 12.3bn, and the pharma, medical and biotech space, which recorded EUR 8.3bn in transactions. Industrials led the volume charts and also came first in value – although skewed by the Thyssenkrupp elevator deal, the largest buyout in Europe in more than a decade. (See table below.)

What best highlights the confidence for private assets, is recent fundraising closures. Summit Partners Europe, for example, announced after three months of fundraising that it reached its EUR 1.1bn hard-cap for its Europe Growth Equity Fund III. IK Investment Partners, meanwhile, has raised EUR 2.85bn against its target of EUR 2.5bn, although at a slightly slower pace of 14 months. 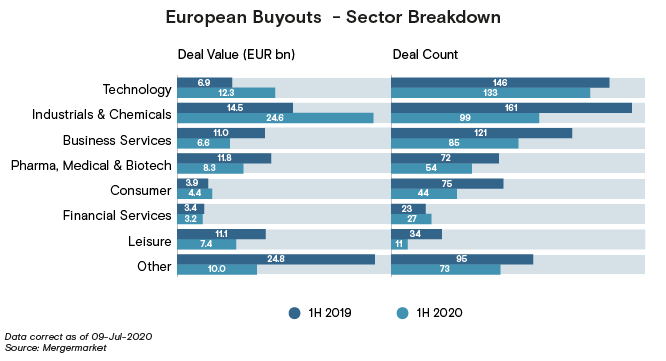 The rebound in global stock markets has created a sense of optimism, with the US Federal Reserve and the European Central Banks supporting the economic recovery post-COVID-19. “As stock markets remain elevated, there is much more of a floor to the M&A market than there has ever been – or certainly than there was in 2009,” said Wautier.

The rebound in confidence could slowly be spreading to the debt markets too. The EUR 8bn debt package supporting the LBO of Thyssenkrupp elevators, finally traded last month. By offloading the debt, in a deal which proved popular among investors, the underwriters are now again in a position to finance further buyout deals, several dealmakers said.

Any recovery in M&A will be dependent on a few factors, including whether another wave of lockdowns is around the corner, or a sell-off in the capital markets or another contraction in valuations for private assets, Wautier said.

But for those willing to take a punt on the uncertainty, buyers could expect to reap the rewards. If the 2008-9 playbook serves right, the vintages immediately after financial crises, including 2010-11, and the dot.com bubble at the turn of the millennium, churn out some of the best results, several dealmakers said.

Deal flow could come from corporate carve-outs, with companies needing to find quick solutions to shore up their balance sheets and refocus on their core portfolio, and in extremes sell some of their most valuable parts, said Roger Barron, M&A partner for Paul Hastings.

Public to private transactions are also on the radar for some in Europe, including BC Partners, which is tracking a few situations but sounding cautious over the approach. “On paper, you do have those opportunities today even more. But public to privates always have a big execution risk,” Wautier said.

Providence, KKR and Cinven’s EUR 5bn buyout of Spanish telecoms group MasMovil [BME:MAS] is one example of a P2P transaction executed during the pandemic. But there have only been six take-privates in 1H20, far less than the 16 completed during 1H19. 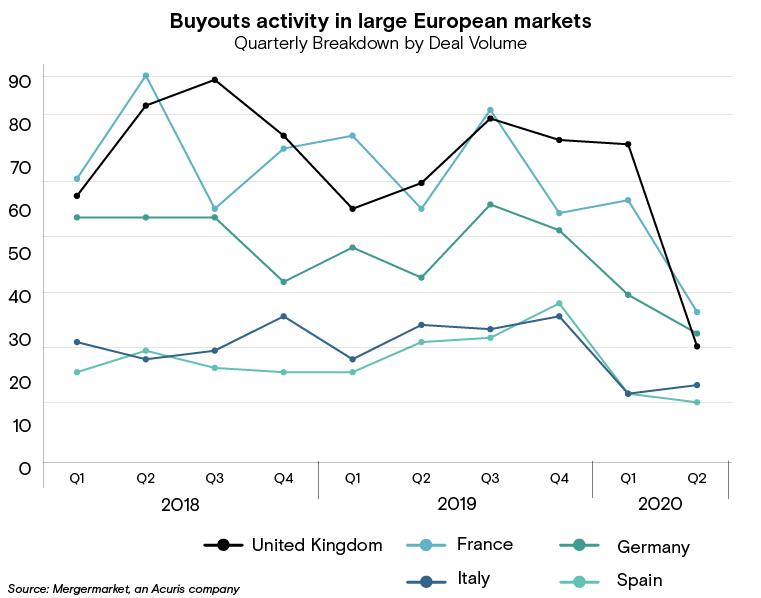 What Hess, from Investec, called Tier 1 assets, which exhibit COVID-19 resilience, strong growth and potential for organic or buy and build roll-out, will also continue to see strong bidding.

“We are seeing the same thing that we saw in 2008. There continues to be strong bidding for tier 1 assets, with numerous successful pre-empts in the past few weeks, with much greater hesitation to spend time on second tier assets, for which people are scratching their heads how they would be able to exit those businesses.”

Lyons said his firm is busy in a number of sectors including healthcare and TMT and thematically he expects that share for share transactions, such as defensive mergers could occur in the coming quarters, along with a meaningful amount of distressed M&A.

“Globally, leverage has gone up by 30% and that is not sustainable. Broadly speaking, lower economic activity will lead to either restructuring or M&A so we are anticipating there will be activity, though it will not be at the level of 2019,” Lyons said. 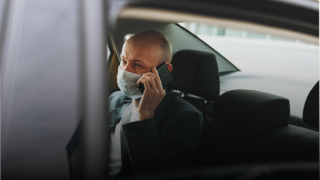 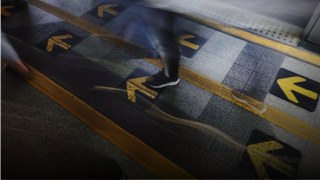