Following another period of lacklustre private equity exits in Q3, Europe saw a spike in divestments by buyout houses in October with momentum so far holding up in November, our data shows.

Financial sponsors announced full or partial exits from 93 investments in October alone. This was a 50% uptick on the September figure and a whopping 116% increase on the low point of 43 exits reached in April. It was also a notch above the monthly average of 88 exits registered between January 2018 and February 2020.

With 28 exits already recorded in the first two weeks of November alone – and bearing in mind that secondary research usually continues boosting these numbers for some time after any given month ends – the momentum shows signs of continuing. 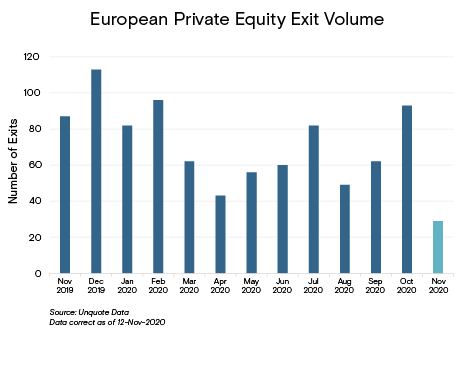 The UK has been home to the lion's share of divestments since July (22% of all European exits), closely followed by France (20%) and Germany a distant third on 12.5%.

The exit routes explored by private equity firms have also undergone some slight but notable shifts. Looking at Q3, trade sales accounted for 45% of all exits, while secondary buyouts made up 23% of the total – the latter somewhat lower than the 26% seen over the 2018-2019 period.

Meanwhile, the statistics highlight how managers are pushed to be increasingly creative to realise value in the current environment, with partial sales making up 10% of Q3 exits, against a two-year average of 6%.

The picture has started to change again recently when it comes to secondary buyouts, though, with such deals accounting for 28% of divestments since the beginning of October. Indeed, a slew of deals transacted between sponsors in recent days, including ECI selling pet foods maker MPM to 3i for GBP 170m; Bregal acquiring legal tech company STP from Hg; ACE buying Astorg's Aries Alliance; and PAI Partners acquiring chilled food producers Addo Food Group, from LDC, and Winterbotham Darby, from Equistone, among others.

It is worth noting, however, that these figures will reflect a buffer between deals being signed and ultimately being announced. They are therefore likely to correlate with a spate of processes progressing in September, just as coronavirus containment measures were at their most relaxed in several European markets.

It remains to be seen how new lockdowns put in place to deal with the second wave of the pandemic, and the general uncertainty around trading prospects for a number of sectors, will be reflected in the December and January statistics.

The Global M&A Conversation is a major virtual event to connect acquirers, investors, advisors and lenders around the deal drivers for 2021. This free event is an opportunity to gain expert perspectives from top speakers in the global M&A community about the themes that will define the market in the future. Register your interest in attending the virtual Global M&A Conversation.

Greg Gille joined Unquote in 2010 as a reporter, initially focusing on the French private equity market. He was promoted to senior reporter and then news editor, before becoming deputy editor in 2013 and online editor a year later. He is currently editor, overseeing editorial content in print and online.

Greg graduated from Sciences Po Paris with a Master's degree in media management in 2009. He started his career in Paris before moving to London in 2010.