Growth and venture capital deal volume exceeded that of all previous half-yearly figures in the DACH region in H1 2020, making for a busy first half of the year that saw 275 such deals, according to Unquote Data. Harriet Matthews reports

Furthermore, the onset of the coronavirus pandemic in March did little to curb venture and growth dealdoing in Q2. In fact, activity increased slightly, with 140 deals recorded between April and June versus 135 in Q1. 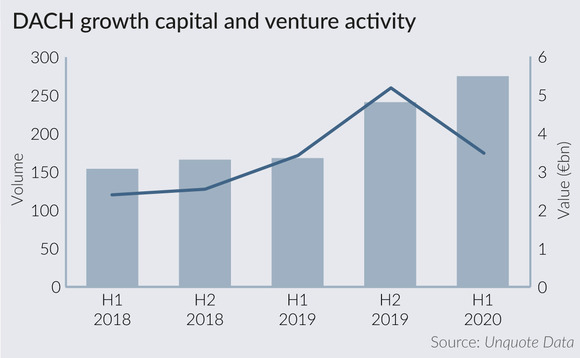 H2 2019's figures were boosted significantly by mega-rounds of more than €100m, which were effectively considered to be pre-IPO capital; however, the first half of 2020 saw few of such rounds. During H1 2020, the largest rounds were seen when Atomico invested more than $240m in electric aircraft manufacturer Lillium in June 2020, and in the $100m series-D extension for banking startup N26 in May, backed by investors including Battery Ventures, Earlybird and Insight Venture Partners.