Global M&A activity has strongest start to year on record

Global M&A activity has strongest start to year on record

Carrying forward the momentum of 4Q20, global mergers and acquisitions activity turned in a strong first quarter performance. While many themes crossed over into 2021, such as the technology sector’s dominance and the continued strength of private equity, some notable shifts did occur in terms of deal size and geographic concentration of deals.

Globally, 1Q21 activity reached USD 1.16trn in transactions, surpassing even the red-hot 2018 and 2019, and making 1Q21 the most active annual opening on Mergermarket record. Large deal values but fewer deals have led to the highest average deal value since 2006 of USD 518.7m (based on 2,243 deals with disclosed deal values). 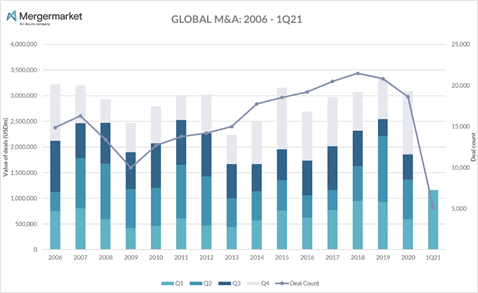 International dealmaking shows strength. Cross-border deals were a significant contributor to overall activity, hitting a record of USD 516.6bn for first quarter activity and nearly returning to historical averages of more than 45% of total deal value. 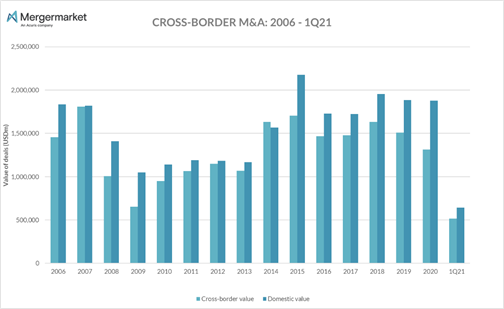 North America back with a vengeance. North America, dominated by the US, reached its highest market share in 14 years netting 54.4% of global deal value, up from 48% in 4Q20. It is a marked turnaround from 2Q20 when North America plunged to 21.5%. North America’s gain came at the expense of all other regions. Save the Middle East, all other global regions lost market share. APAC excl. Japan saw its market share decline to 14%, down significantly from its 37.2% share in 2Q20.

SPAC space surges. Special purpose acquisition companies (SPACs) played a large part in the overall increase in IPO activity, particularly in the US. Year to date, more than USD 97bn has been raised by 304 SPACs globally.

The SPAC surge may take hold in Europe as an increasing number of the specialized vehicles are coming to market, as reported. M&A tied to SPACs has also been spiking, with 99 deals totalling USD 219.5bn taking place globally in 1Q21, eclipsing all of 2020, Dealogic data shows. The average deal value for SPAC transactions was USD 2.2bn for the quarter, up from USD 1.2bn in 2020. 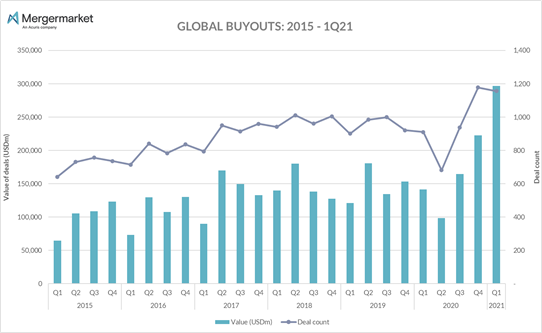 Private equity flexes muscles. For years, the amount of reported dry powder held by private equity has risen to ever greater levels. The COVID-19 pandemic appears to have acted as another catalyst for sponsors to deploy capital. In 1Q21, PE buyouts reached new heights with USD 296.6bn in buyouts (1,156 total deals), one of the most active quarters since 2001 in terms of deal value save 2Q07.

Since 3Q20, PE sponsors have deployed USD 683.5bn. That buyout surge follows several quarters of outstanding exit activity. Over the last three quarters, private equity exits have totalled USD 638.9bn in deal value, including USD 213.9bn in exits and 711 total deals in 1Q21, representing a USD 212.9bn quarterly average. That level is 140% the historical average of USD 88.7bn per quarter since 2001.

Technology dominates, but Transport is biggest winner. Technology media telecom (TMT) continued its deal-making dominance with USD 344.8.7bn in value over 1,237 deals, making up 29.7% of all deal value. Year-over-year, the shift has been striking, with deal value jumping 247% from USD 99.4bn in 1Q20.