Southeast Asia is expected to begin to bounce back in 1H21 - in the best-case scenario that a vaccine will be rolled out next year - with deal activity picking up, especially industrial and technology deals.

In the worst-case scenario, amid a second wave of global infections, deal activity may not return to pre-COVID-19 levels until 4Q22.

In the current market volatility, business uncertainty, valuation issues, and travel restrictions, some deals have been cancelled or put on hold. Meanwhile, several companies have filed for bankruptcy and many have taken impairment losses for past acquisition values in their books, said Srividya Gopal, Managing Director, Valuation Advisory Services at Duff & Phelps.

For example, Singapore Press Holdings [SGX:T39] announced in March it would not proceed with its acquisition of a portfolio of senior housing properties in Canada in light of global market instability following the outbreak. It had earlier agreed to purchase the portfolio for CAD 232.9m (USD 174m).

Deals reaching the finishing line have also seen some hiccups as regulatory approval is delayed, but this is primarily due to governments being distracted by the outbreak, said Luke Pais, EY ASEAN M&A and Private Equity Leader.

For deal-making in the region, Vietnam was quick to pick up post COVID-19, but a number of these deals are cross-border, so it is still difficult to complete transactions when travel restrictions are in place, said EY ASEAN Transaction Advisory Services Leader Vikram Chakravarty.

Vietnam, particularly, has so far been the largest beneficiary of the supply chain diversification trend spurred by the US-China trade war. As this trend plays out post COVID-19, other countries in the region are also expected to benefit as alternative destinations now that the global outbreak has ushered in a new era that calls for multiple manufacturing points and a resilient supply chain, Chakravarty noted.

Chinese companies could also look to deploy more capital into Southeast Asia amid the escalating tension between Washington and Beijing, which has resulted in the US being a closed market to certain Chinese investments, Norton Rose Fulbright’s Hong Kong-based Partner James Parker said.

The sectors facing more adverse impact from the pandemic in the short-term include airlines, hospitality, leisure, retail, and others that are dependent on discretionary spending, Duff & Phelps’ Gopal and Norton Rose Fulbright’s Parker said. In the medium- to long-term, the adverse impact could be felt by other sectors such as real estate and transportation, as COVID-19 makes companies consider dynamic changes to the way they operate, Gopal said.

According to Gopal, who uses an unconventional classification approach, there are three sectors that are expected to see stable valuations, if not an uptick. The first is the “essentials” category, which includes healthcare, life sciences, food, household essentials, power, utilities. The second is technology, including telecom, IT infrastructure, communication infrastructure, software applications, internet-based services. The third one is “early adapters” - the industries that are able to adapt faster to the new normal - such as financial services and education.

A number of deal activities in the financial services had already taken place prior to the onset of COVID-19, especially in Indonesia and the Philippines. The region is home to a large underbanked, underinsured yet young population with rising income, making financial services an appealing sector, Norton Rose Fulbright’s Singapore-based Partner Craig Loveless said.

This favorable demographics would also benefit healthcare, education, and accordingly healthtech, online education and insurtech. This will continue to drive deal flows in the post COVID-19 world, Loveless and Parker said.

“Transform (digitally) and transact” has also emerged as a key theme for corporates, EY’s Chakravarty added. Conversations with advisors are ongoing as some of these corporates gear up to shed non-core assets and double down through acquisitions, especially in the digital and analytical space, Chakravarty said.

Philippines’ largest telecom company PLDT [PSE:TEL] told its shareholders last month that it is amending its primary purpose to reflect its transformation into a multimedia company and aims to invest in the digitalization of key sectors affected by the pandemic such as healthcare, education, food production and logistics. Singapore-based conglomerate Keppel Corporation [SGX:BN4] also announced in May that as part of its long-term transformation, it will actively pursue M&As in core areas including energy and urban development while initiating a strategic review of its logistics unit. 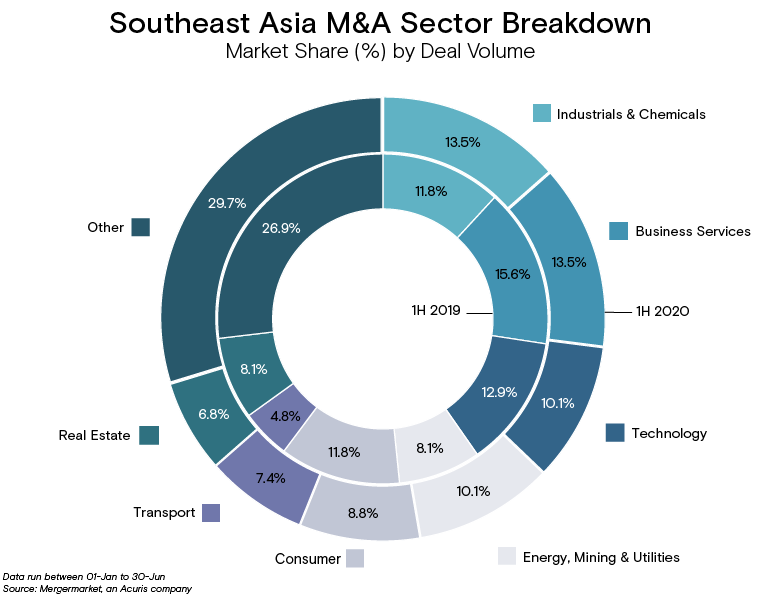 By Mergermarket estimates, valuations in the region could fall to roughly 10X EBITDA this year from almost 14X last year.

Some of the global markets like the US and UK have seen a steep fall and a V-curve type of revival in the last few months. The fall and rise has been more tapered for most Asian economies. It is still a V-curve, though not a steep one, Gopal said.

In general, the market has gotten more used to functioning amid uncertainty. That said, if there is a second wave of infection or it takes longer to develop a vaccine that could lead to re-emergence and/or lengthening of lockdowns and restrictions, the “V” can become a “W” or even a “VL” shape, which would result in a prolonged recovery or even recession in some economies, Gopal said.

The new normal in valuation is to budget for uncertainties through planning for different scenarios. This also gives rise to a more nuanced deal structuring and financing, including having earn-outs, contingent considerations, indemnities and more clauses that could be tied to actual results rather than only predictions, Gopal said.

Other elements being discussed in ongoing transactions also include convertible and exchangeable instruments, EY’s Pais said.

Through convertible instruments, investors will get some downside protection in the form of a liquidation preference and priority in dividend payment in the short- to medium-term, Parker said. Such instruments can be converted into ordinary equity to maximize upside potential in the long run, he added. 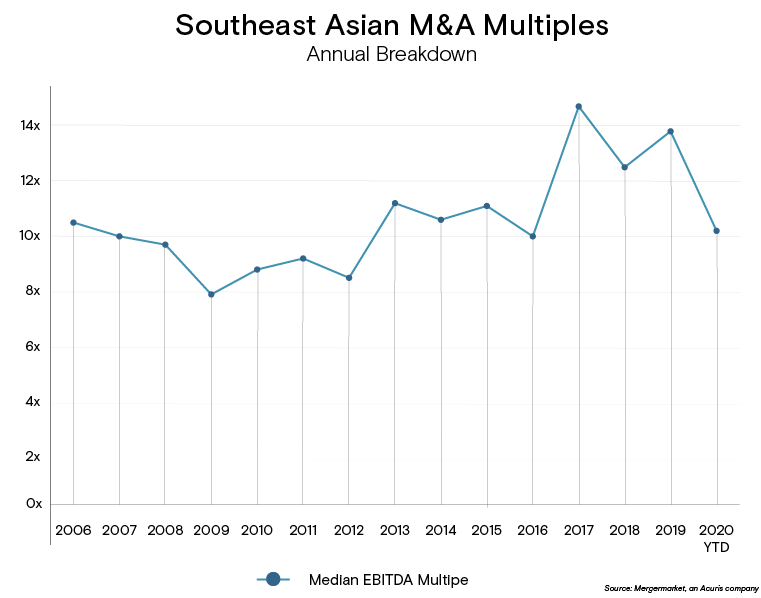 Private equity investors have prioritized portfolio management over the last few months, with a focus on liquidity and scenario planning, Pais said.

Sitting on a large amount of dry powder, these investors are still having a strong deal pipeline but are taking a measured approach to make sure they structure the right terms, Pais said. Around 70% of their time is estimated to be spent on portfolios while 30% on new deals or bolt-on acquisitions to the portfolios, Chakravarty said.

Sovereign wealth funds and government-linked funds in the region seemed to take a more prudent approach last year amid growing concerns over the bull market entering its late cycle, Chakravarty said. These investors are expected to get more active in a dislocated market and would seize opportunities to help their existing portfolios leapfrog to the top-tier, he noted.

On the exit front, EY estimated that about 50-100 PE portfolios are ripe for an exit in 2020/21, but the timeline is likely pushed back to 2021/22 given the difficulty of putting an earning forecast in the current environment, Pais said.

The timeline remains fluid even for some portfolios that stay agile and resilient amid the crisis. This is because vendors want the assurance that the right pool of buyers will be at the table before placing the assets on the block, which is hard to achieve now due to the travel restrictions, Pais said.

Three PE investors told Mergermarket that they have spent more time on existing portfolios in recent months while still analyzing new opportunities. It is “less a matter of appetite and more a question of how to buy right and execute right with all these travel restrictions,” one of the investors said.

It is typical in Southeast Asia that the source of capital and deals have originated in one place while the assets are located in another market. It requires extensive traveling to get a deal done, while cross-border travel is massively impeded and does not appear to improve anytime soon, Chakravartys said.

One of the PE investors, based in Singapore, noted that his firm is taking virtual tour of physical assets located in other markets, and in-person visits are scheduled for a later date.

Whether a virtual tour is acceptable would depend on the type of investors and the level of due diligence that an investor intends to achieve. For a commodity business deal involving assets like plantation, there is no real substitute for physical site visits, Norton Rose Fulbright’s Loveless said.

Besides this, growth capital raising is a dominant deal type in Southeast Asia, and to a large extent, the success of these transactions depends on the relationship building between the existing and incoming shareholders, Pais said.

“While you can do lots of other things virtually, it’s very difficult to get the deals done in this part of the world without shaking hands,” Chakravarty said.

by Lizzie Ko and Anjali Piramal, with analytics by Mate Taczman and Prasad Deshmukh 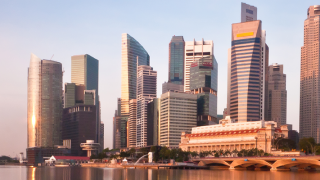