The dealmaking climate in the energy, mining and utilities (EMU) sector in 2020 was distinctly gloomy, and the outlook for the coming year is mixed, according to our survey with Wolf Theiss.

M&A in the EMU sector in CEE/SEE held up on a volume basis in 2020, but value evaporated as investors watched the price of crude oil collapse in the first quarter on the news of the, then emerging, pandemic. By April, the price of oil futures had fallen well below US$0 for the first time in history. Inevitably, this volatility caused investors to retreat from M&A in the sector.

There was a total of 41 transactions, a 2% year-on-year shortfall, while value collapsed by 72% to just €1.7bn. Those deals that did go through were either directly or indirectly motivated by the long-term energy transition to cleaner power sources. 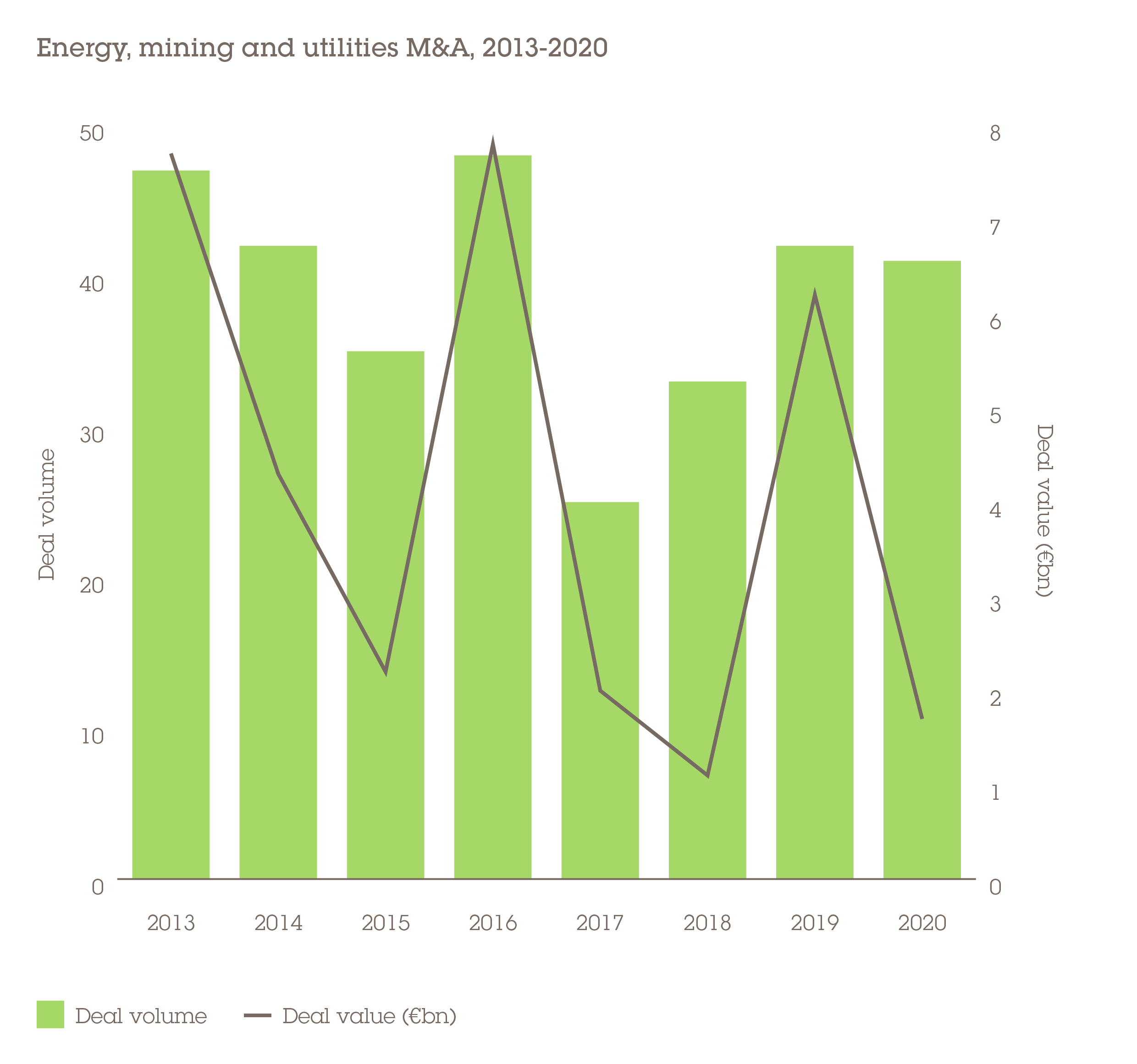 The largest, valued at just €801m, saw German utility EnBW divest its 28.35% stake in EVN, an Austrian power producer and retailer with businesses in 16 countries, to Vienna utility Wiener Stadtwerke. From an acquisition standpoint, the deal represents a straightforward consolidation play. However, for EnBW the cash raised will allow it to focus on renewables acquisitions as it shifts its strategic footing.

The second largest was Austria’s leading power company Verbund's purchase of a 51% stake in Gas Connect from OMV for €437m. Verbund sees value in building out its network to transport green gases such as green hydrogen, while OMV has been diversifying into higher-value petrochemicals to reduce its exposure to the oil and gas market. These two deals constituted 73% of the entire CEE/SSE region's EMU M&A value for the year.

Acquirers check out the Czech Republic

The Czech Republic is typically a highly active energy M&A market, although that was not the case in 2020. The largest transaction, worth €92m, involved Liechtenstein's Sev.en Energy acquiring Elektrama Počerady, the largest Czech coal-fired plant. Sev.en plans to upgrade the power station to meet the EU’s environmental requirements, bridging the gap as the Czech Republic, which obtains 42% of its energy supply from coal, weans itself off fossil fuels.

While 2020 was quiet, the 2019-2020 period saw €4.1bn worth of M&A, making the Czech Republic the highest value EMU deal market in CEE/SEE. The attraction of the country is its position as the third-largest net electricity exporter in the EU after France and Germany – Austria, Germany and Slovakia being its primary export markets. Our research indicates that the country will remain a focal point, with close to half (44%) of respondents shortlisting it as at least one market in which they are seeking EMU deals and 28% specifically singling it out; in both cases, this put the Czech Republic above any other country in the region. 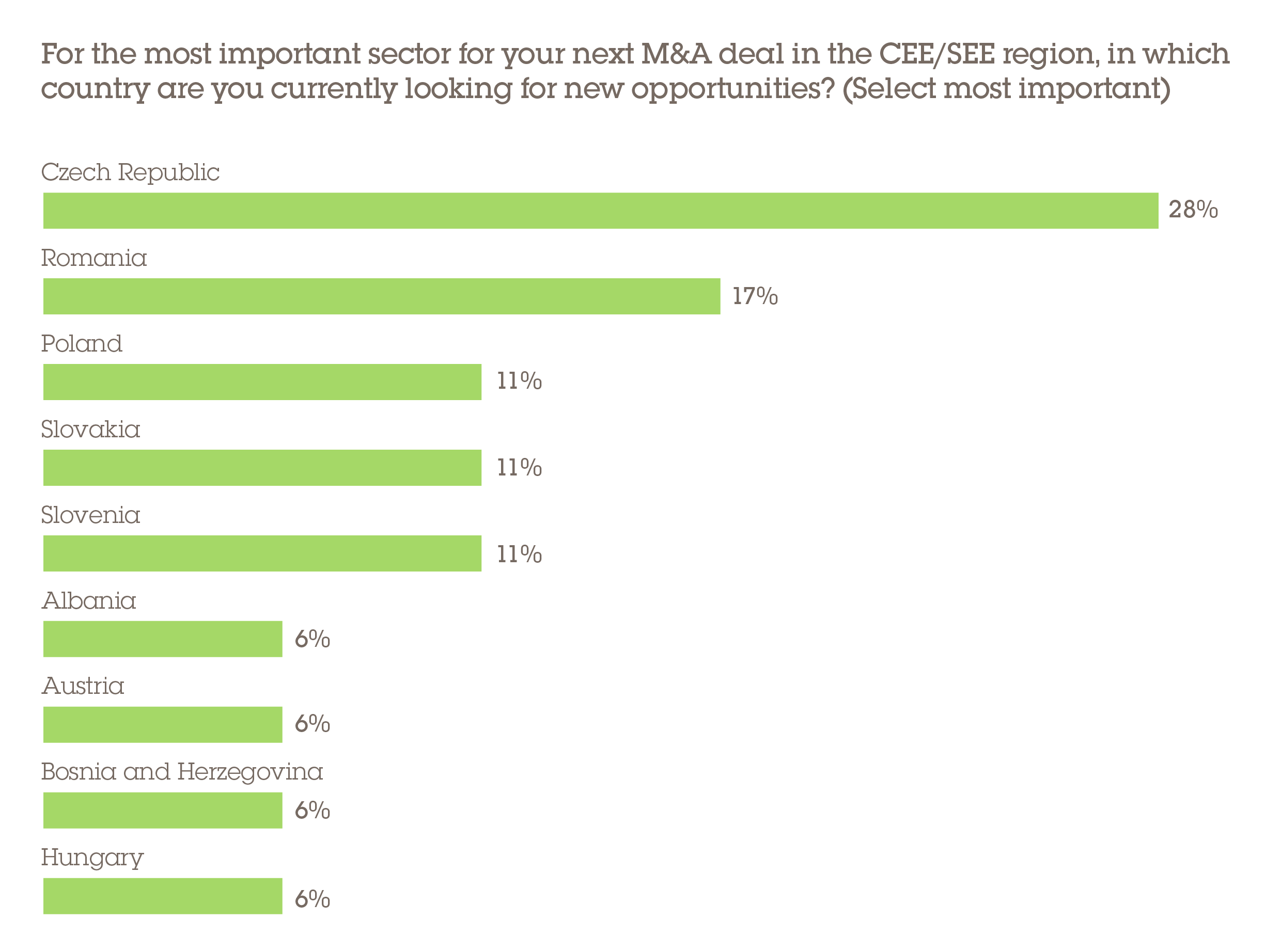 According to our survey with Wolf Theiss, there is a possibility that the sector could remain quiet through much of 2021. One-third of respondents said that they have significantly less appetite for EMU deals over the next 12 months, compared with 23% across all sectors. 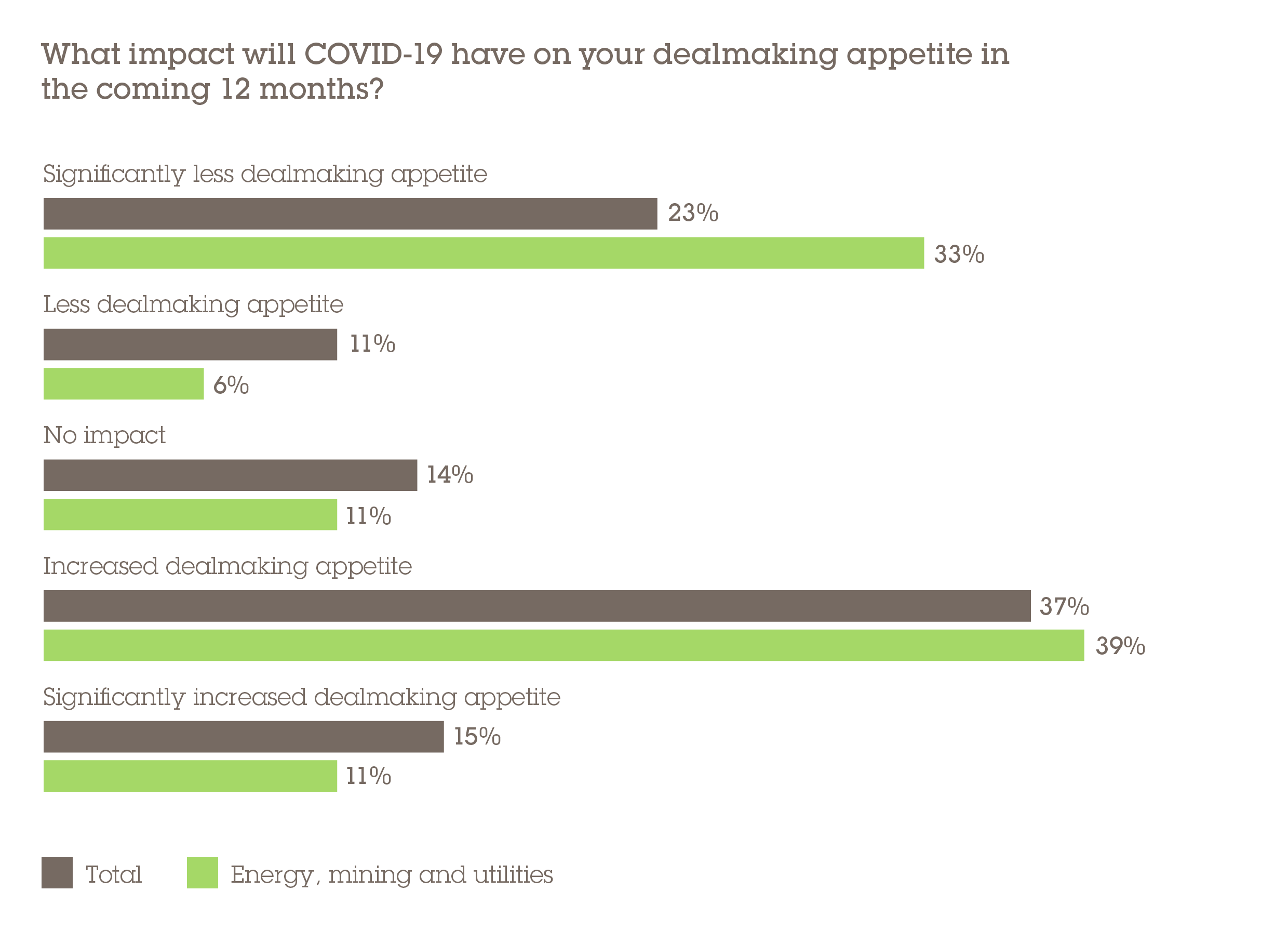 And while economic performance was relatively strong in the region, a positive for local energy demand, the oil price softened once again in December 2020 as it emerged that a more contagious variant of the SARS-Cov2 virus had developed. Also, energy companies rely on demand from the countries they export to and, with Western Europe on course to lag CEE/SEE, investors may seek greater clarity on the recovery before they are willing to transact. There is interest in some offshore oil and gas fields in the Black Sea, with investors evaluating secondary and tertiary wells that operators may seek to offload from their portfolios. The long-term driver, however, is undoubtedly the energy transition and the rise of renewables. In many cases, capital from local sources and development banks has helped greenfield solar and wind farms to lay their foundations, creating an opportunity for these to be sold on and expanded by foreign investors with deep pockets.

Clearly ESG considerations are highly relevant to the EMU sector. Fossil fuels continue to dominate energy production and they are the main contributor to the carbon emissions which the EU are striving to reduce with the policy initiatives that fall under the European Green Deal.

Almost three-quarters (72%) of respondents looking at the sector for their next deal expect ESG scrutiny to significantly increase over the next three years, nearly double the 37% of who expect this across all industries. Rather than hindering M&A, however, closer attention to ESG considerations will be a strong long-term motivator for deal flow. 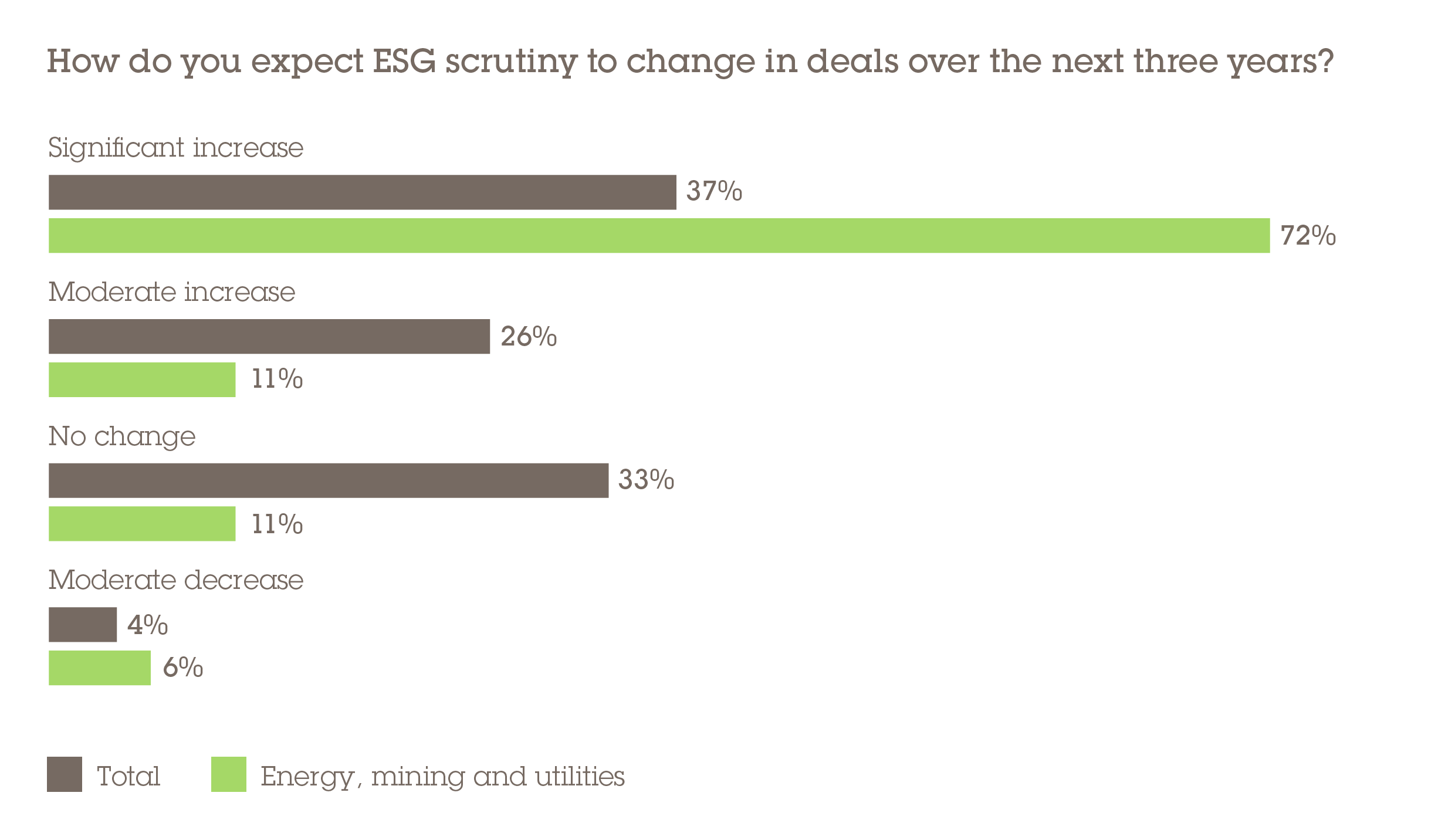 EMU is one of the most cyclical sectors and a second wave of the pandemic has clouded the economic outlook across Europe. This will make banks cautious to provide senior financing on deals, and any recovery in M&A activity should be expected to be concentrated in the second half of 2021 as the pandemic begins to be managed and conditions improve.

The immense pressure on energy groups to repurpose their portfolios remains, which can be seen from the few transactions that did make it through in 2020. Expect oil companies to seek M&A in adjacent industrials and chemicals markets, as well as deals that help them to restructure their portfolios towards cleaner fossil fuels and renewable energy to prepare themselves for a more sustainable future.