Show me the money: The future of financing deals in CEE

Show me the money: The future of financing deals in CEE

The financial crisis saw banks retreat and private lenders emerge. In the years since, this once-nascent trend has become increasingly mainstream. And our survey with Wolf Theiss reveals that private backing for deals in CEE is only going to grow.

The year 2020 forced investors and lenders to completely recalibrate their risk assumptions. As such, corporates and PE fund managers have had to reconsider their ability to access deal financing, and from which sources. They’ve needed to assess if there was sufficient demand in capital markets for equity issuances to raise cash for M&A, or whether banks would be willing to back highly levered deals given the uncertainty over the pace of the economic recovery.

Investors are divided over such questions. Looking towards the next 12 months, 38% of respondents say they believe it will become more difficult to raise funds, while 46% feel it will be easier. This net optimism is well founded. CEE stands out for the swift return of demand in its economies following the first wave of the pandemic. In Poland, inflation reached a two-decade high in July as consumer demand quickly returned. This was made possible by the country's economic momentum – after decades of growth and rising wages, Poles have more spending power than ever before. This is good news for corporate balance sheets.

This may explain why cash is king in deal financing: 74% of respondents said that balance sheet reserves are expected to be a source of financing for their next deal in CEE/SEE, with 27% earmarking it as their most important source of financing. Proprietary capital confers inherent benefits in the speed of deal execution, an advantage that is suited to the current climate. 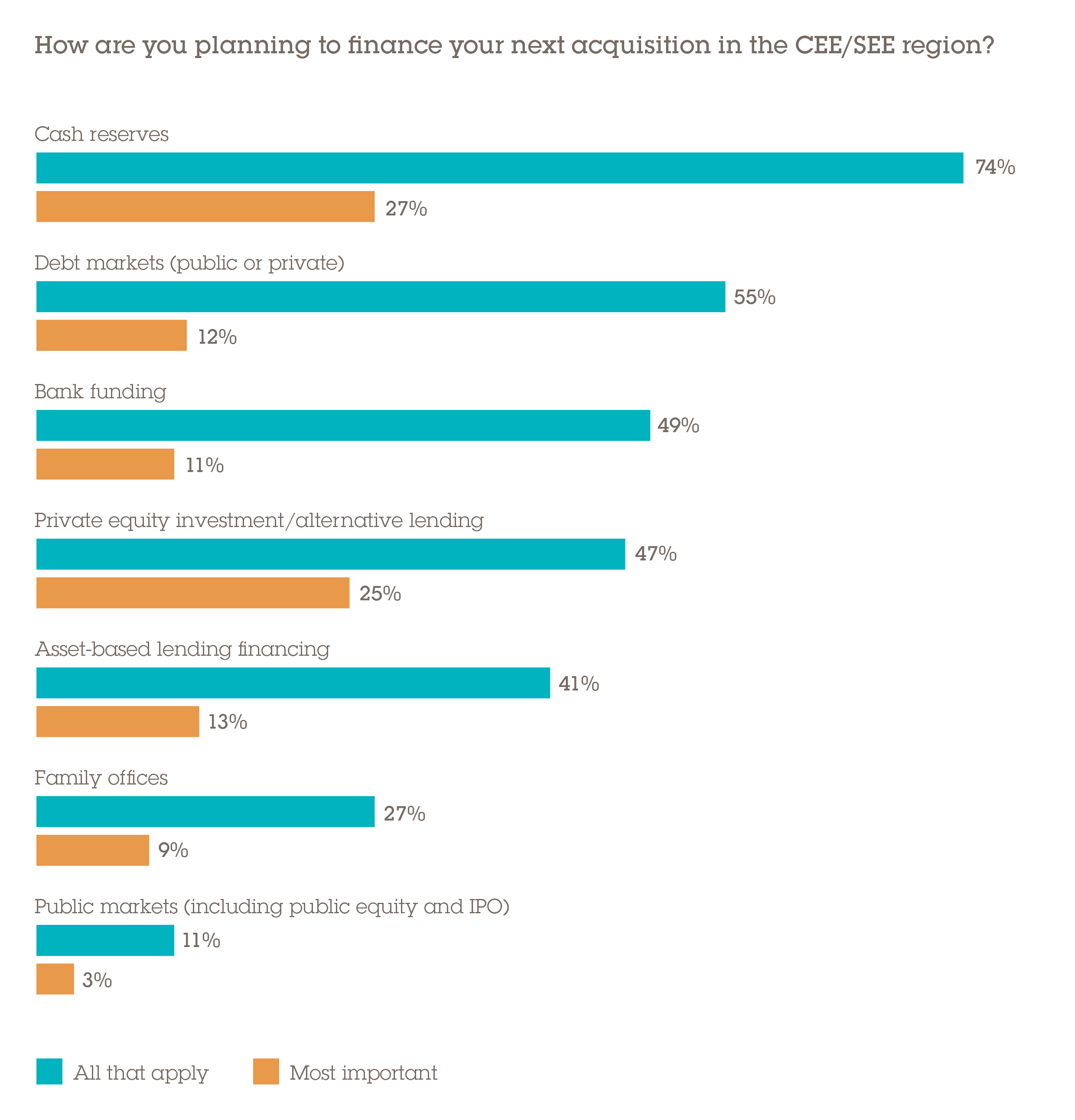 Sourcing loans or issuing equity in public markets can be fraught with uncertainty, especially to finance deals in sectors that investors are having second thoughts about, and in the context of an ongoing and unpredictable pandemic. And acquirers always have the option of refinancing acquisitions at a later date should they choose to.

The director of corporate development of a US multinational that is planning to rely on cash reserves for its next M&A deal said: “We cannot depend on the other types of financing in the current economic situation, which is why we have chosen cash as the first option. It is more accessible, and our reserves have grown faster than expected because we built a customer base rapidly. Not everyone is in the same position.”

Traditional debt financing is still likely to play a fundamental role in acquisition financing in CEE over the next 12 months. Debt markets and bank lending were cited by 55% and 49% of respondents respectively as possible sources of capital for deals; however, only 12% and 11% of investors singled these out as being the most important options.

Instead, a quarter of investors are drawn to private equity/alternative lending as their number one choice, only slightly behind cash, with just under half (47%) citing it as among their preferred options. The evolution of direct lending across Europe over the past decade has reshaped the financing market. With the tightening of banking regulations in the aftermath of the global financial crisis, private debt funds sprung up across the continent, supplying a product to satisfy unmet demand.

On the road to direct lending in CEE

The outlook for direct lending in CEE is highly positive. Countries such as Poland and the Czech Republic have had some of the swiftest and most determined fiscal responses to the pandemic of anywhere in the world. Both countries quickly cut interest rates to near zero and initiated quantitative easing, Hungary and Romania following with their own bond purchase programmes. Combined with EU recovery funding, set to be rolled out from 2021, this should help CEE businesses to mitigate further waves of the pandemic, although such measures are only temporary.

Another effect of this determined fiscal and monetary approach is yield depression, a boon for direct lending funds, which offer investors compelling risk-adjusted returns. This should support strong fundraising demand for private debt strategies. Moreover, these lending funds are similarly attractive from a borrower perspective since their strategy is geared towards leveraged loans. This means they have an inherently high-risk appetite, something that traditional banks are currently lacking.

“Alternative lending sources will provide us with more flexibility in our deal structuring,” says the head of strategy of a Swiss corporate. “These sources of finance will be the most accessible in 2021, because banks and financing institutions will be more conservative. The market risks will prevent them from lending larger amounts.”

Accessibility will be paramount in 2021 and 94% of respondents believe that private equity and alternative lending will be among the most readily available forms of financing in the year ahead; further, 43% believe this will be the single most accessible financing option, putting it leagues ahead of any other source. 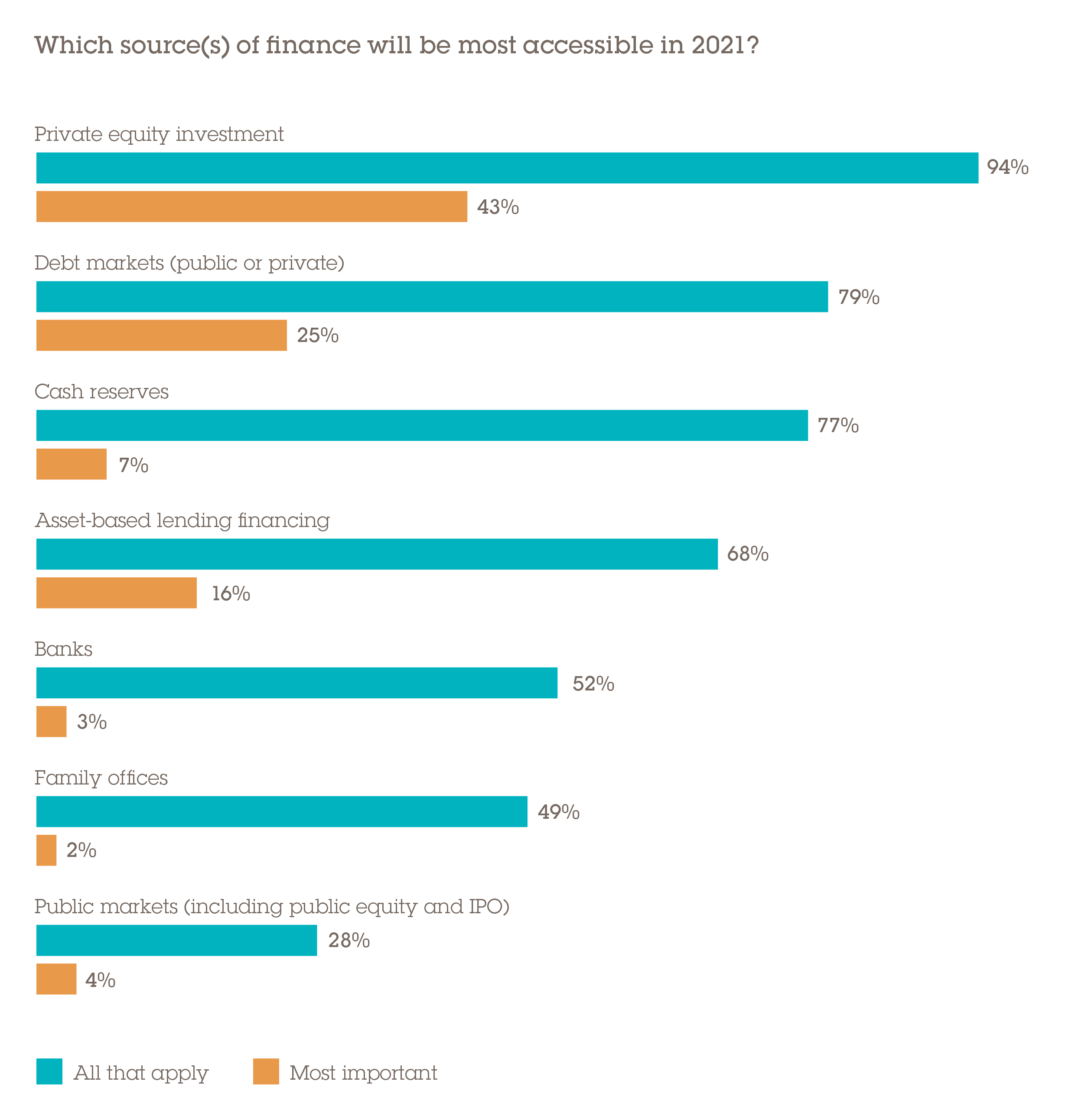 It is fair to say that investors have limited confidence in the ability of traditional lenders to back their forthcoming acquisitions. While 52% view bank loans as being among the most accessible options, in stark contrast a mere 3% consider this to be the most attainable form of financing.

A factor working in PE's favour is the internal restrictions that lenders face, which can make traditional bank financing more challenging for mid-market companies to obtain. This gives private capital a competitive advantage.

“Many banks in the region have lending limits of single loans to mid-sized companies. They can't lend too much or the security rights are just very significant or too expensive,” says Przemyslaw Kozdoj, partner in Wolf Theiss' Warsaw office. “It can be hard to find international banks because they oftentimes have country or sector limits and so the availability of private capital, through mezzanine, subordinated or equity-like instruments, can give more flexibility and breathing space.”