Despite the pandemic, and, in some cases, because of it, M&A in the technology, media and telecommunications (TMT) sector has flourished. According to our survey with Wolf Theiss, it will continue to do so.

Few sectors were spared amid the mass disruption to public life caused by the pandemic in 2020 – with the notable exception of the technology industry. With the rapid retreat to homeworking, demand for online services including software and content streaming, as well as connectivity, soared last year and investors paid close attention, zeroing in on TMT assets as a rare pocket of extreme growth.

This underpinned strong M&A activity in the TMT sector. Value increased by 56% year on year to €8.3bn, surpassing every other industry. The strong fundamentals were not enough to prevent a fall in volume, however, with deal numbers dropping by 17% to 79, which is to be expected given the challenging circumstances of 2020. 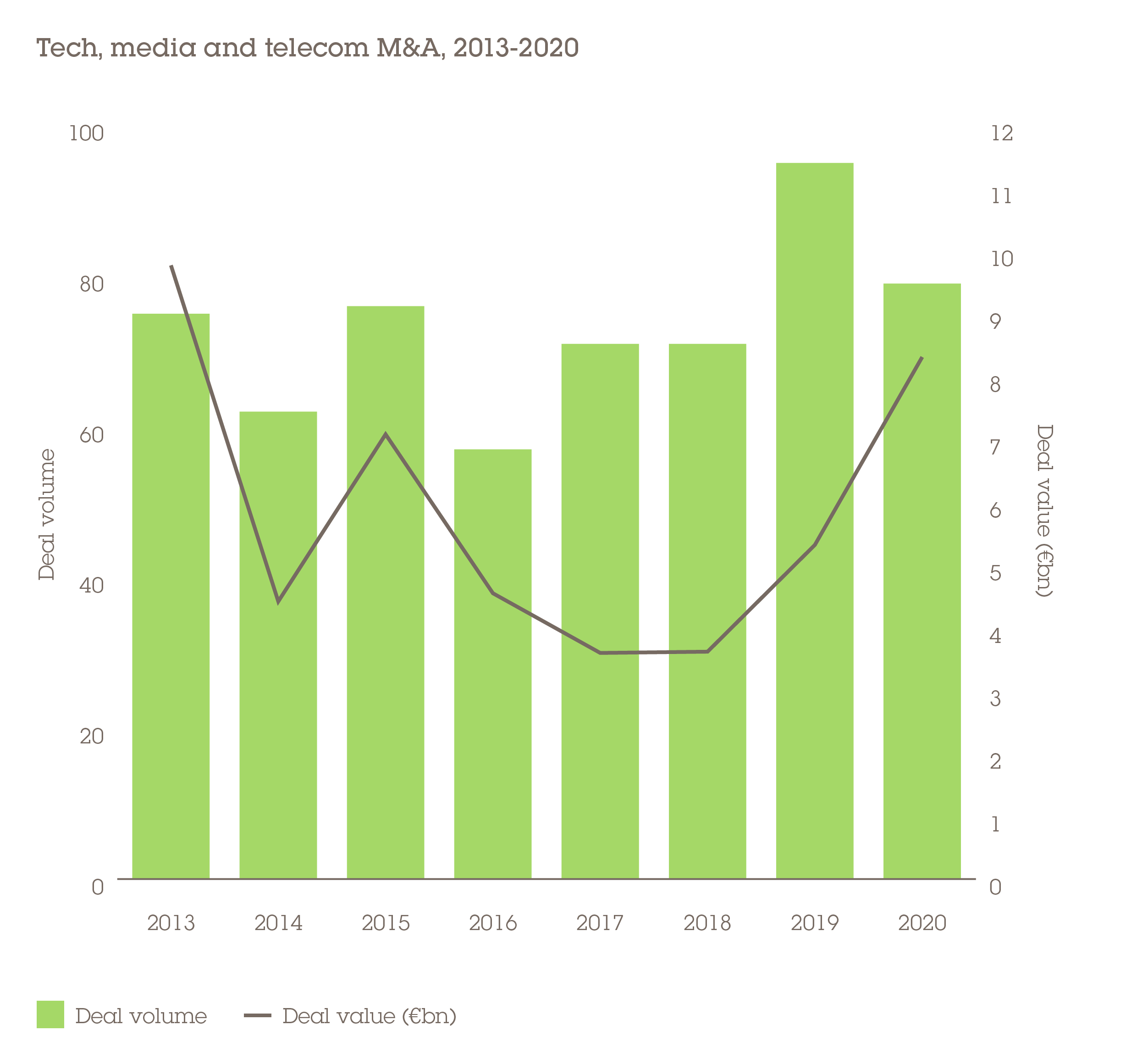 Lockdown conditions confirmed the need for connectivity and this has supported the investment case for telecoms and broadband networks. It was a telecoms deal that took the top spot within TMT when French telco Iliad bought Poland's Play Communication for €3.7bn, and four of the five largest deals in the sector involved telecoms assets.

The M&A outlook is broadly positive, with 58% of respondents believing that the impact of the pandemic will increase dealmaking appetite within TMT over the next 12 months. 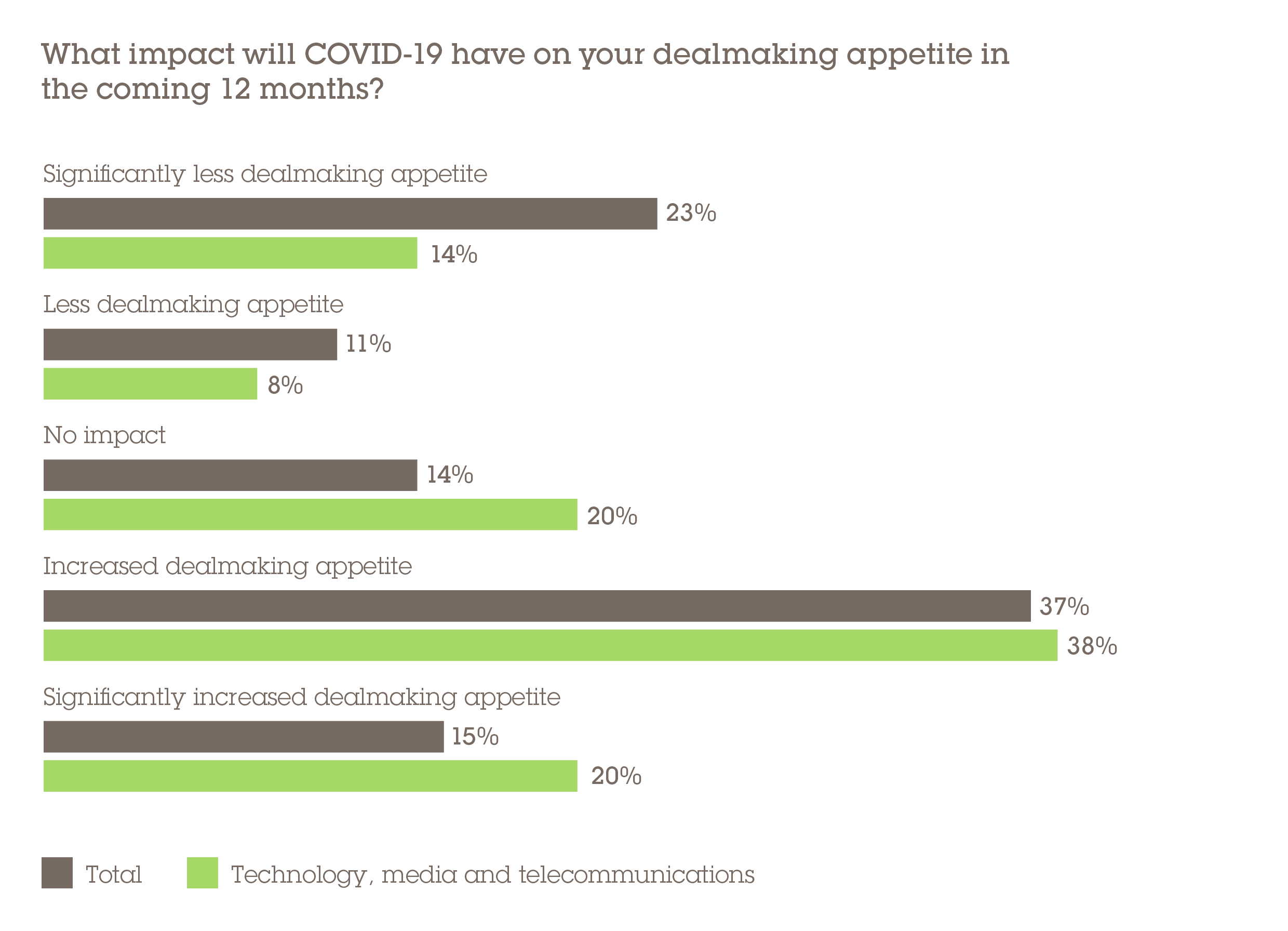 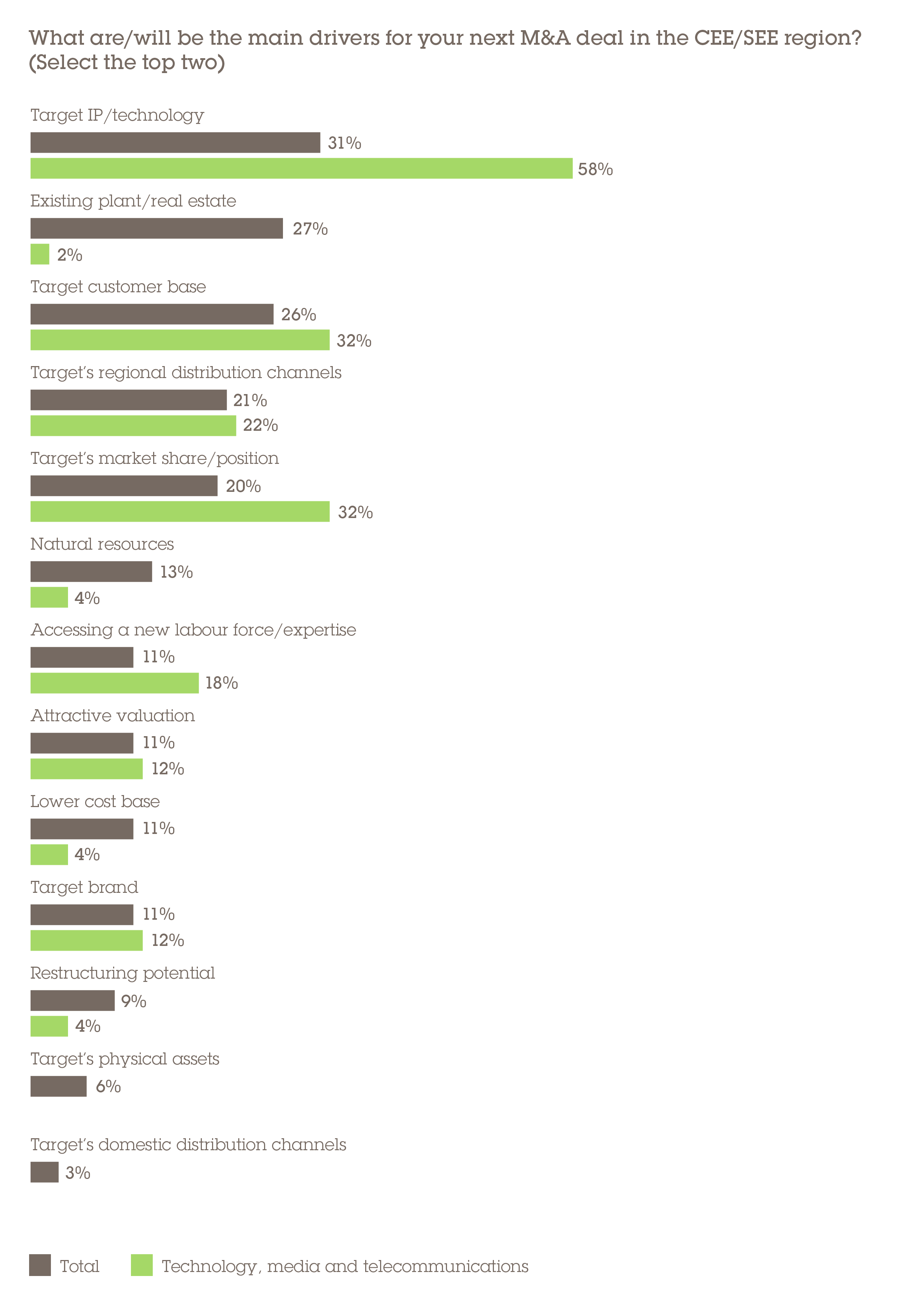 The top driver for their next deal, cited by 58%, is targeting IP/technology. The need for businesses to accelerate the digitalisation of their operations is likely to be a strong motivator of deal activity.

Another major driver is the ongoing restructuring of the telecoms market, which also converges with the media sector. Telcos continue to separate their passive infrastructure assets from their core retail companies, the latter increasingly moving into proprietary content with bundled broadband, telephony and video streaming services. Towers and networks typically sell for around two to three times more than the average trading multiple of integrated telcos and so represent an opportunity for incumbents to raise significant sums of cash while simplifying their operations.

Play Communications sold its infrastructure to Spain's Cellnex for €800m as part of its deal with Iliad. For Cellnex, this was part of a wider acquisition strategy in which it bought 24,600 towers and sites from CK Hutchison, owner of mobile network Three, for €10bn. This mega play also included the infrastructure of Austria's Hutchison Drei, which at €1.1bn was CEE/SEE's second-largest TMT deal of 2020.

"Competition for acquiring passive tower infrastructure assets is clearly increasing across Europe", says Dora Gazi Kovacevic, a partner in Wolf Theiss' Zagreb office. "Infrastructure holding companies and infrastructure funds are also scouting the market for tower assets in Central Europe and so we expect additional transactions in that space."

There is future potential here too. Some telco incumbents in the region have already sold their infrastructure assets; O2 Czech Republic, for example, divested its network back in 2016. However, Orange Polska, the market leader in Poland, currently still owns the largest network in CEE/SSE's largest market, with other incumbents such as A1 Telekom Austria still in ownership of their hard assets.

Meanwhile, deals are likely to come under more scrutiny from an ESG perspective. For the first time in our survey with Wolf Theiss, we asked respondents about ESG in dealmaking, and 64% believe these considerations will increase in the next three years. From human rights and labour issues through to supply chain management and consumer protections, investors will be conducting much deeper due diligence on the ESG credentials of prospective targets – as demanded by the acquirers’ own shareholders and investors. 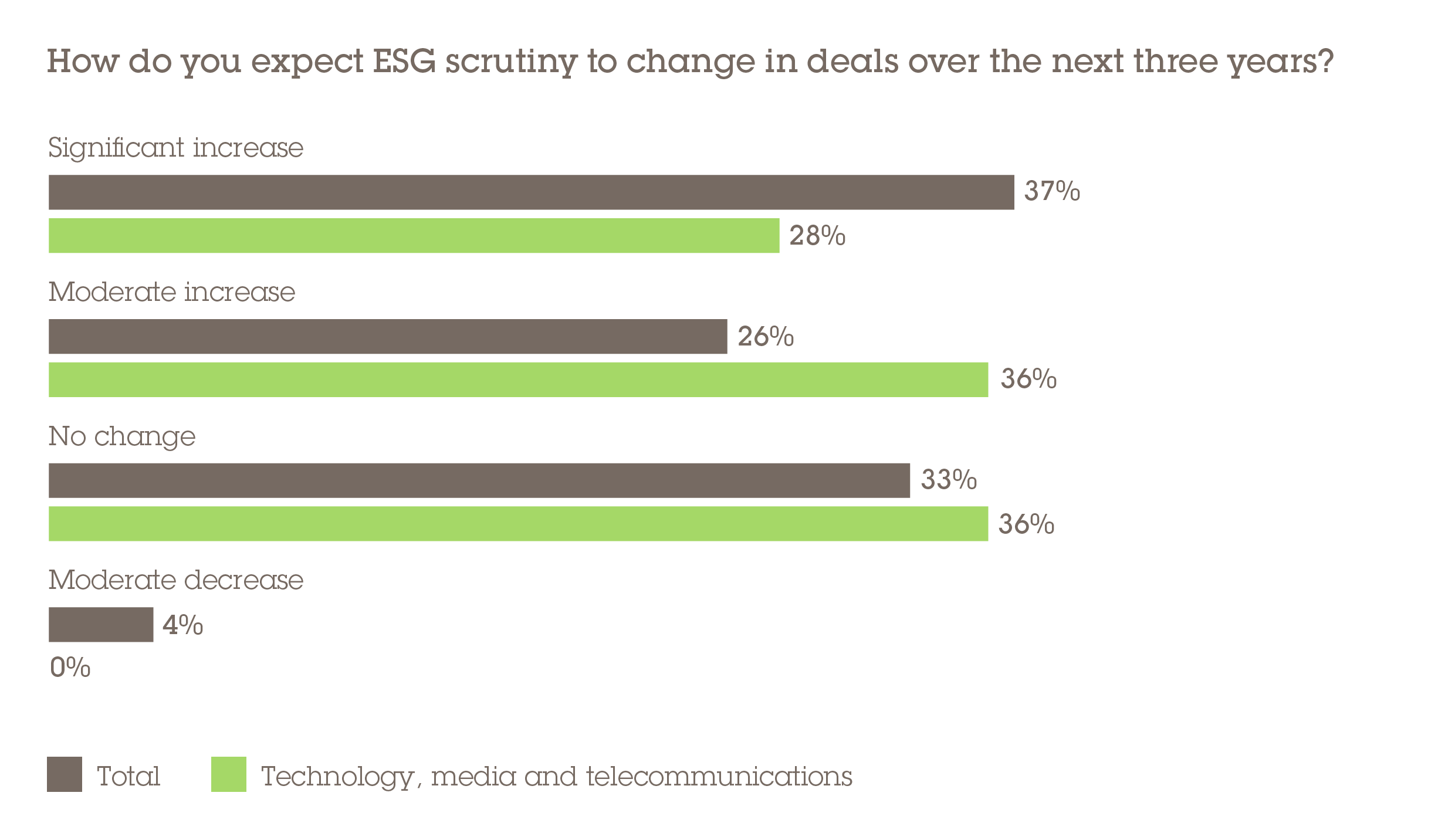 Respondents look towards Poland and the Czech Republic (28%) as gateways for their next opportunity in the TMT sector, and the factor that will have the most impact on choosing the country for their next TMT deal is GDP per capita (30%). 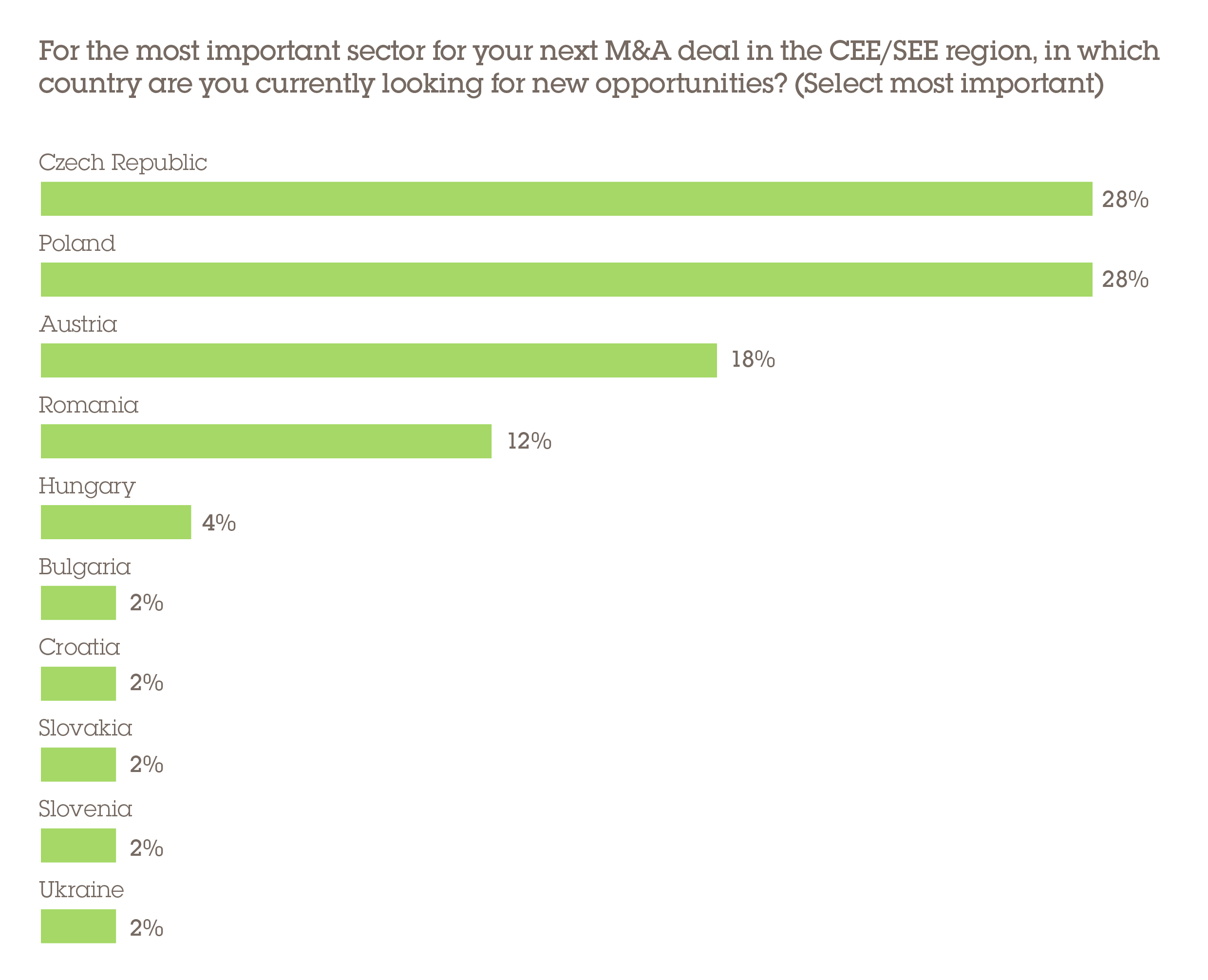 A number of CEE/SEE countries have developed buzzing technology and software sectors over the past decade, driving the development of some star assets. Private equity firms Cinven, Permira and Mid Europa have benefitted from this, exiting parts of their interest in Allegro, the Polish e-commerce group, in the largest IPO in the history of the Warsaw Stock Exchange.

Following the US$12bn float in October 2020, Polish game developer CD Projekt Red ceded its position as the highest value stock trading on the bourse. In spite of a product recall shortly after its release in December 2020, prompting a sharp fall in CD Projekt Red's share price, Cyber Punk 2077 was one of the most anticipated titles of recent years and has been projected to sell 20 million units in its first year, worth approximately US$1.2bn in retail value. This has helped to put the company's valuation on par with Ubisoft, the French developer with a nearly 40-year history.

Gaming has been a remarkable success story for Poland. The government has given game development projects huge support by deploying as much as US$150m in grants from EU funds under its GameINN programme and applying a preferential tax regime of 5% on IP, as well as helping universities to launch coding courses. This has resulted in there being more than 440 games developer studios in Poland alone.

A heavy emphasis on technical skills in higher education, not only in Poland but countries such as Ukraine, the Czech Republic and Romania, has benefited the wider software industry and, especially in the case of the Czech Republic, this has contributed to a flourishing venture capital industry.

TMT has outshone all other sectors recently, both in terms of revenue performance and M&A demand. That is unlikely to change in 2021. Vaccine developments are clearly a major boon for those industries that were brought to their knees in 2020, and these are likely to see the strongest rebound in performance and deal activity over the next 12 to 24 months. However, tech and connectivity is by no means a flyby trend. The health crisis has only increased the TMT sector's appeal and that will not fade even as the pandemic abates and economies recover.

However, a note of caution. Given the central role that IP acquisition is playing in tech M&A, foreign investors should familiarise themselves with the specifics of IP rights in the different CEE/SEE markets. Unlike the US, for example, where buying IP rights wholesale in a transaction is straightforward, in Poland it is, for example, necessary to establish the chain of IP ownership and fields of exploitation. This is complicated by the fact that many CEE businesses use freelancers from universities and other third parties to develop their technology. Identifying ownership rights during due diligence and in the sale agreement is absolutely paramount and can cause delays if not planned for in advance.